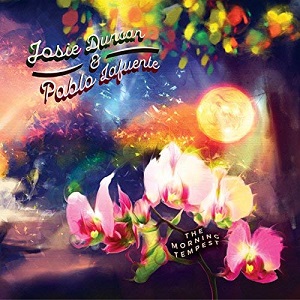 
Josie and Pablo won 2017's BBC Radio Young Folk Award, not long after the release of their debut EP (which unfortunately didn't come my way). They prove an interesting teaming - Josie's a singer from the Isle Of Lewis currently based in Glasgow, whereas guitarist Pablo's of Spanish descent - and their combined sound is enticingly clear and pure and limpid. The overriding quality of this, their debut album, is freshness, with a confident lightness of touch at the forefront, and the combination of talents makes for a thoroughly engaging listen over the disc's far-too-brief 36-minute span (the timing includes around two minutes of audio silence before a hidden bonus track) . And even though some of the songs are taken at a brisk pace, there's never a sense that it's being rushed through without consideration for the storytelling or message. The ostensible title track, for instance, is an uptempo rendition of the wellknown Night Visiting Song; this is taken at quite a lick (informed by Josie's flatmate's rendition, we learn), as are the duo's take on the classic ballad King Orfeo and their lively account of the Rosemary Lane variant He Called For A Candle- and in all cases you can hear every word! Josie's diction is impeccable, and the youthful, almost innocent timbre of her voice suits the more venerable material more than you might expect. Even the stepping-up of pace for the final section of the Potato Puirt mouth-music set is deftly managed, and doesn't become just a crowd-pleasing dash for the finishing line.

The album's producer Scott Wood has chosen to augment Rosie and Pablo's delicately balanced guitar-and-voice delivery with classy and supportive guest contributions from some Glasgow-based young musicians and friends, who between them play mandolin, fiddle, cello, whistles, double bass, flugelhorn, bodhrán and percussion. Josie's fellow Lewis singer Colin Macleod supplies the gentle duet vocal part on Josie's own intimate and beautiful composition The Great Escape (which, sadly, is the only instance of her writing to grace this CD, and I'd like to hear more). Another high point is Josie's tender, heartfelt rendition of the intensely moving Alistair Hulett song He Fades Away, written from the viewpoint of the wife of a dying miner, which receives some outstanding, sensitive instrumental support from Pablo, flugelhorn player Hedley Benson and cellist Rufus Huggan. Canadian songwriter Wince Coles' composition By The Glow Of The Kerosene Light receives a wistful rendition, and complements the pair of Gaelic songs earlier on the CD (a spinning song from Uist and a pibroch originating on Lewis - the latter recorded live). And finally the bonus track - a slightly ambient-sounding take on The Fisherman's Lassie, which may prefigure a future direction for the duo's musical adventures, but at the same time feels a touch "tacked-on" to sit with the rest of the album. But there's no debate - this is a wonderful debut record, enchanting and well-judged.