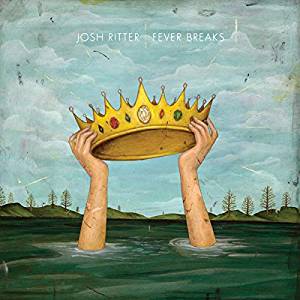 
Josh Ritter's tenth studio album is sure to excite many people as his name has long become synonymous with top-notch lyrics and quality storytelling through song. Expectations are further heightened as he has teamed up with acclaimed musician and producer, Jason Isbell and his band the 400 Unit. Fever Breaks is a collection of 10 incredibly well-crafted songs, firmly rooted in the Americana Folk genre, and after an initial listen through impressions were unquestionably positive. There were a few welcome surprises with a number of production decisions and the album as a whole invites many repeated listens.

After two decades of demonstrating consistently high-quality song writing, Josh has truly cemented his reputation as a leading light in creating narrative song structures and telling powerful, emotive stories. He is surely paving his way to becoming one of the great American singer songwriters, and this is clearly evident with the trajectory of Fever Breaks as a follow-up to his previous release in 2017, Gathering. With songs in his back catalogue such as "Another New World", "The Curse", and "The Temptation of Adam", he sets his own bar incredibly high, commonly drawing comparisons to legends like Cohen and Dylan. On top of this he manages to effortlessly add his own brand of folk/country/blues/pop and remain directly relevant in these turbulent times. The overarching theme of Fever Breaks is somewhat reflective of current events, particularly in the American sphere of politics, and a much needed response that many will be needing to hear.

If you can manage to shift focus from the lyrical genius that is evident all through the album, the instrumentation and arrangements are something else worth paying attention to. This may be largely down to the influence of Jason Isbell and the 400 Unit, but well placed solos in "Old Black Magic" , "The Torch Committee", and "Silverblade", support the songs to maximise their potential in emotion and intensity. The production quality throughout is also worth appreciating in the isolation of a good pair of headphones, and holds up to anything in the acoustic genres being released today.

Standout tracks would include "Old Black Magic", a catchy, gritty, bluesy number with a rock solid groove executed to perfection. The guitar solo at the end is one of the instrumental highlights of the album with a killer tone and hugely powerful phrasing that just begs you to crank up the volume. The more traditional style murder ballad "Silverblade" provides a more narrative experience, and initially draws comparisons to the trad tune "Silver Dagger" popularised by Joan Baez. This is followed up with "All Some Kind of Dream" which continues a theme of reflection on American foreign policy and the refugee crisis. The choice of a very American sound for this song also helps to send a strong message of accountability and responsibility for these issues.

The album artwork is very fitting for a lot of the songs and is quite a powerful statement in its own right. A welcome feature is the inclusion of a lyric booklet to further appreciate the full extent of lyrical mastery on display.

With the combined talents of Josh, Jason and the 400 Unit, Fever Breaks is certainly a formidably well-rounded album which offers a range of songs, and provides a much needed sanctuary for the fears and worries of many people in current times.

All Some Kind Of Dream