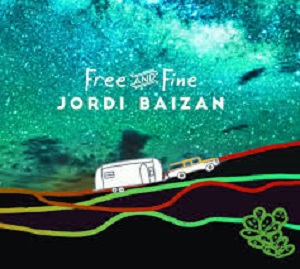 
A Texas-based country singer-songwriter of Spanish and Cuban parents, this album ably delivers all that might suggest, which is to say dusty Americana veined with piano, pedal steel, accordion and fiddle and songs that talk of family, home, heartache, the road and the occasional mention of whiskey. Opening with the strummed romantic love that never was reminiscences of a 'Between The Sun and the Moon', Jaimee Harris on harmonies, he has a relaxed, easy on the ear delivery that can bring an effective emotional catch to the vocal and writes lived in melodies that swing between uptempo shuffles like the mandolin driven 'Pictures On The Wall' about settling down, the old time hula swing feel of 'Let's Have Seconds', a bluesy 'Tears and Mascara', the reflective balladry of the piano-led storysong Harry Chapin-ish 'Time To Leave The Neighborhood'.

He has a real way with observational lyrics, on the lost opportunities 'It Could Have Been Us' he sings of being in a local store, noticing "the tomatoes and nectarines, your skin and that guy who you were with who was more than just a friend, the way you looked into his eyes was like morphine for pain." while 'Footsteps on the Ceiling' is a poignantly moving semi-spoken insight into other people's lives narrative, annoyance at the noise the new neighbours make transforming to empathy on learning of the mother' cancer and getting to know and care about the kids.

He adopts a similar talking approach to the gypsy fiddle, shuffling percussive rhythm of 'Whiskey In The Water' about how "you can't wish away the evil in this world" as the father who sets out to take down the dealer who led his only daughter to death by heroin.

It ends with the autobiographical 'Heroes All Around Us', a song about living through the experience of Hurricane Harvey when much of the Gulf Coast - his home of twenty years included - was turned upside down and a thank you to all those who pulled together to help. While unlikely to make huge waves outside of his stomping grounds, those prepared to take a punt on a new name won't be disappointed.

Pictures On A Wall