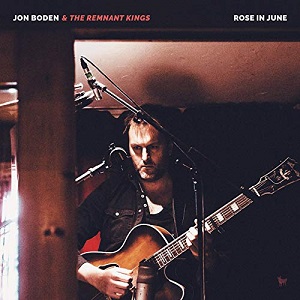 
I'll begin with the sweeping statement: Jon Boden must surely be considered the most inspirational and influential folk artist of his generation, not least in that he's contributed so extensively to the cultural evolution, longevity and increased popularity of folk music in all its glorious incarnations, ensuring its continued relevance both through enthusiastic championship and dynamic yet fully respectful performance and onward transmission. Jon's been firmly at the forefront of progressive reassessment of folk tradition during the past two decades, pushing at its boundaries while demonstrating an astounding level of prowess in so many spheres of folk activity, whether as singer, musician (fiddle, concertina, guitar), composer, arranger, bandleader or researcher. And winning numerous awards in the process… He also commands loyalty - and a high standard of musicianship - from his peer-collaborators, with whom he enjoys a strong mutual empathy, invariably achieving and maintaining a healthy and stimulating balance between the preservation of deep tradition and its imaginative reinterpretation.

Back in 2012, Jon's masterly solo project A Folk Song A Day was to prove revelatory, giving a timely contemporary vindication to the acceptability (and natural place) of many different kinds of song within the broader definition of folk tradition. This simultaneously thoughtful and thought-provoking venture was naturally complementary to both his increasingly well-regarded powerful contemporary songwriting and to his role as something of an ambassador for folk to a younger generation via his brilliantly showmanesque leadership of the veritable behemoth that was the folk-big-band Bellowhead. Although all these various strands of Jon's folk interest overlapped and dovetailed to some extent during the decade following the launch of his recorded solo career in 2006, they have only really come together under one roof, so to speak, in his constantly-evolving post-Bellowhead band The Remnant Kings (which originally came together in 2009 to perform Jon's Songs From The Floodplain album). This band has toured in both six-piece and extended 11-piece versions, effectively affording Jon (and his audiences!) the best of all worlds.

Although the personnel history of The Remnant Kings is more complex than can be entered into here (Jon's own liner note helpfully clarifies much of this detail), the inordinately versatile drummer (and much more!) Sam Sweeney (imported from Bellowhead) and multi-skilled Rob Harbron have been with the band from the start and are key to its identity, along with more recent recruit, oboe and violin supremo Paul Sartin (also an erstwhile Bellowhead stalwart); it helps too that all three can contribute great vocals to the mix too. Latterly, the addition of bassist Ben Nicholls and electric guitarist Richard Warren has brought an increasingly rockier sound to the band dynamic, while Jon's penchant for intelligently intricate string and brass scorings has been enabled by the engagement of five extra musicians (three strings and two brass). And this is the lineup which graces Rose In June, although the total complement is used cleverly and selectively so that every strand of the texture is both justified and properly audible.

The album's title song forms its undeniably spectacular opening gambit, the first of its three standout tracks - and what a magnificent mission statement! It sets Jon's expressive and charismatic account of the ballad (learnt from the singing of the late Lou Killen) retelling the tragic events of 17th December 1872 to an ambitious orchestrated score which builds majestically for its sweeping "hallelujah" climax. This close-on-ten-minute epic never feels its length, and should by all accounts be impossible to follow - and yet its pole placing soon justifies itself in the face of the alternative positionings, none of which would have quite the same impact IMHO (although if this were a vinyl LP it would most probably have ended up as Side 2 finale!). If I'm totally honest, I do feel the hybrid-shanty/drinking-sing All Fall Down comes as a bit of an anti-climax at track 2, but I can't really envisage any better choice to fill this difficult slot.

The remainder of the CD is a satisfyingly accurate and skilfully sequenced representation of the band's live repertoire, impeccably engineered (in what used to be termed "demonstration quality audio) to convey all the punch and excitement and sensitivity (and slick, accomplished presence) of this particular collection of musicians at the very top of their game. Three of the album's tracks are enterprising rearrangements of Floodplain songs; the ambivalent (if tongue-in-cheek) sentiments of Beating The Bounds are presented in defiantly beefed-up solid-state animated folk-rock mode, contrasting with the more shaded ambience of the trickily-metred anthem We Do What We Can. Two of the album's standouts come with Jon's unusual, decidedly experimental arrangements of traditional songs: Rigs Of The Time sports a deliciously neo-classical "Remnant Strings" scoring in something of a coup-de-théâtre, while Seven Bonnie Gypsies is movingly reinterpreted to bring out the latent sense of sadness that Jon perceives in the song's scenario. Another highlight comes with an unexpected choice of cover - Kate Bush's Hounds Of Love - on which four of the Remnant Kings are momentarily transformed into a concertina band, an intriguingly fulsome yet stripped-down incarnation which affords an unusual backdrop for Kate's directly personal lyrics which have hitherto tended to be submerged amidst the '80s technical wizardry of her original version. Arguably less successful is the Remnant Kings' somewhat "exsultate jubilate"-flavoured take on Ewan MacColl's love song Sweet Thames Flow Softly, where Jon's decision to omit the final verse to my mind robs the song of its special central poignancy in transforming its perspective. The album's menu is completed by three instrumental tracks, the first of which (Leviathan/Tombola) is noteworthy for its sprightly delivery and lively juxtaposition of Scandinavian and English influences, while Ruin Reel and Carnival Hornpipe both have their origins in music written to accompany the post-apocalyptic narrative of solo album Afterglow.

Rose In June, The Remnant Kings' first CD release, fittingly (and entirely deliberately) exemplifies, illustrates, crystallises and consolidates the unique spread of material that has become central to the band's live sets but has never been committed to tape; here, the latter feat, though fraught with aural challenges, has been managed with exemplary aplomb by producer Andy Bell, brilliantly encapsulating the distinctive personality, presence and accomplishment of this performing unit and its illustrious and intensely talented mainman.

The Hounds Of Love