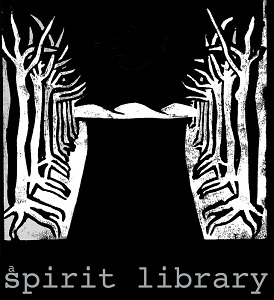 
It's always nice to receive an album that feels original even before you hear the music. The cover artwork for 'A Spirit Library' is striking and its list of 11 intriguingly titled tracks is typed on loose, recycled, lined notepaper, so creating a level of anticipation not unlike those few minutes before you are about to watch a favourite band perform live.

The album itself demands your time and attention, at times sparse, at times anthemic, but always folk. While Jonathan Day adeptly applies his multi-instrumentalist skills, on instruments collected from his world travels, this is very much an album of songs. These are delivered with a cultured voice of a quality akin to that of Liam Omaonlai or Roy Harper. So no track hopping, and don't imagine for a minute you can know one of his songs from the first few bars.

Its beautifully played "opening piece of welcome" by the Kailash Maanke String Quartet at first feels a little incongruous for a folk album, but on later listening it becomes a piece that settles the listener and clears the mind for the poetry that is to come. People don't seem to listen to whole albums these days, and this introduction commands you to stop what you are doing, sit down, and give the whole work the time it deserves.

The crisp guitar opening of 'In Memory, A Crossing Of Great Seas' is the canvas on which Jonathan's Day applies his rich voice and cleverly metered lyrics. The hopeful chorus of "Shine, light of the world, shine your light on me, and one day we'll see a healing" belies the song's caution about the ruinous impact of commercial over-fishing. 'A Woman Made Of Leaves Has Labrodorite Eyes' slows the maritime pace, layering a Lankum-style, earthy melodeon beneath the delicate strings of (I assume) his Saung Gauk Harp. This melancholy of this track is also very much its appeal, and I found myself playing it repeatedly.

'Gone To Earth' lifts the mood, continuing the use of ethnic instruments, before the epic 'Cajsa's Tears (Les Marlées Perdues)' takes to the stage, combining Day's beautifully descriptive lyrics with carefully placed guitar accompaniment and an extended note to play it out which, for Beatles aficionados, is a bit of a 'A Day In The Life' moment. This is my personal favourite song on the album.

A quick leap from the longest to the shortest track, 'From A High Stone Gallery, Open To The Sea, I See It's New Year' has a folklorish quality about it. "I've eaten yew berries on the threshold of night" is one of a number of lyrical highlights that reinforces Jonathan's understanding of, and love for the natural world around him. There is something very connecting about the spoken human voice, even in languages we may not understand, and the 'Lost Languages Café' uses spoken tongues in an instrumental way to add weight to the sadness conveyed that "There is one goodbye that must be the last".

My guess is that the atmospheric backing to 'Pipistrelle Fly Beneath A Vault Of Stars' is provided by the delicate touch of a pair of Balian iron gongs. Again, Day's lyrics offer beautiful descriptions of the world around us, the things we so often take for granted. It took me a time to warm to 'June 9th 1924 (A Place Of Mountains)'. I think it was more that I was hoping the album would be given a lift at this point, because listening to the track on its own doesn't give me the same feeling. The return to a guitar track brings the listener back to more familiar ground. 'Sanctuary' is essentially a love song, and continues the melancholy of the second part of the album, before 'In A Hall Of Ravens A Harp Is Tangled With The Books' brings this interesting listen to a calming instrumental close.

For me, this album's main achievement is that it grounds the listener. We spend our lives rushing around, reacting instantly to messages and living life at frantic speed, and we are missing so much of the beauty and calm of the world around us. 'A Spirit Library' brings us back to a more human pace. I hope I will be forgiven if I have misplaced some of the fabulous instruments used in its recording!