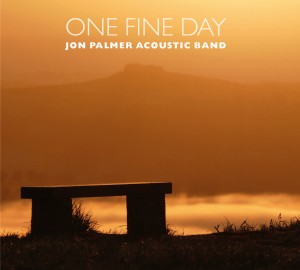 
First off, I must confess I am huge fan of Jon Palmer and his acoustic band, having followed their rise from their earliest rumblings.

One of Yorkshire's great live acts, with high musicianship and great songs, the transition to recorded material can be a hard act to pull off..

So here were are with the band's third studio album, One Fine Day, featuring 12 new songs are written by Jon Palmer. It follows the bad's critically-acclained second album, The Silences In Between.

The subject matters are a familiar theme for anyone who has an interest in Jon's songs - the Yorkshire town of Otley features prominently as it is the hometown of the band, but there's room for more social angst tackling subject as diverse as Mr Trump, Brexit, and a even adepressed 19th century millworker.

Jon is never afraid to wear his heart on his sleeve and this album finds him in fine form.

The lively opener, Music Town (now guess which town that is...) gives a guess of what's to come. Wendy Ross's excellent fiddle is high in the mix, with the rhythm section of Ricky Silvers on double bass and the drums of Roy Whyke propelling the song along very nicely.

The title song is another upbeat song featuring the superb mandolin and whistle of Matt Nelson and backing vocals from Edwina Hayes, a fine artist in her own right.

Other musicans to appear on the album include producer David Crickmore and Baz Warne of The Stranglers who guests on three tracks.

Jon Palmer's song-writing is of the highest order. The lilting Broken Pieces of Yesterday with lovely fiddle and bass, shows another side of the band. Sensitive and beguiling.

Great North Road is bang on, with the tinkling guitars of Nick Settle setting the scene and there's more great fiddle. The band is really cooking now.

Bridges Not Walls tackles some of social evils of our time, Vagabonds & Rogues is a slower song with the feel of a soft Irish tune, Hey Now! is another upbeat crowd-pleaser.

Brexit get the Jon Palmer treatment in Little England, a beautifully crafted song with a muted and senstive arrangement.

The intriquingly-named The Knife-Thrower's Assistant (think about it) again has Wendy's fiddle high in the mix, She Walks With Me is another sensitive song featuring sympathic backing from the band.

The good songs just come on coming, in fact this is such a strong album there are no weaklings here. Great guitar on No-one Can Hear, another crowd-pleasing song is the icing on the cake.

The final track is Everytime You Bang The Drum, is another sensitive song about our troubled times, with superb ensemble support. Just lovely.

So if you want to hear folk-rock at it's finest, with insightful song-writing and top-class musicanship then this album has to be on your list.