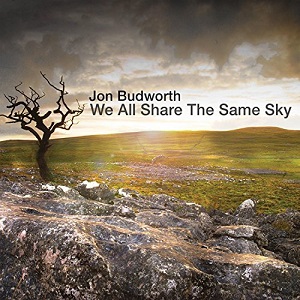 Jon Budworth
Album: We All Share The Same Sky
Label: Self Released
Tracks: 10
Website: http://www.jonbudworth.co.uk
.Jon Budworth, a Leyther who worked teaching guitar in schools in Wigan. A career change, no more “Smoke On The Water” for kids eager to rock their flight of fancy. Jon trained to become a pilot. He flitted from Lancashire to Yorkshire, settled in the bustling town of Otley and started work on this his first album

“We All Share The Same Sky” is an accomplished work of art, it is accessible in the same way that listening to a Ralph McTell record always is. You associate quickly with the lyrics, the feelings expressed strike a chord. The opener “Waiting For The Lightning” for example probes the depths that we all sometimes experience when you wonder just how much worse it can be before it surely gets better.

We feel stress, we want to escape the pressure, to revert to a simpler time, a time where elemental forces are the only distraction. To become a “Lighthouse Keeper” one such dream of escapism. Introspective self penned songs, a fine fingerpicking acoustic guitar style which is both clear and bright and you gain the impression that these songs are well rehearsed and familiar, songs that have been lived in and grown, polished and honed. “Hill View” is a homage to those who stand apart perhaps, whilst “3am” is fast, frantic and captures the essence of anxiety and the feeling of not being able to sleep, insomnia fuelled by worry.

The true story of Bernard Jordan is told sympathetically, an octogenarian living in a care home in Hove who decided he would join the 70th anniversary commemorations of D-Day, sparking a police search when he went “missing”. Dubbed “The Great Escaper” he made it to France with his medals hidden under a raincoat. It proved to be his last big journey as he died months later followed sadly by his wife Irene seven days later. A tale worth telling and Jon Budworth certainly does the gentleman proud.

Inspired by local past events “Dusty Roads” is a love song set around the time of the English Civil War which divided the town of Leigh and “Some Days” expresses the beauty of the changing seasons to a lane just off the East Lancs Road at Glazebury.