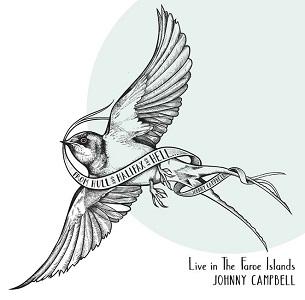 
This is a live album from the much-travelled folk impresario Johnny Campbell. Recorded at Maggies, Nolsoy on The Faroe Islands this is a hugely entertaining work that mixes traditional and original songs with a capella, instrumental, and some rattling good stories. So don't be put off by the apparent length of some of the songs, just lose yourself in the stories that precede them. Lose yourself in the true folk experience.

"Copenhagen" continues the Nordic theme with the story of Campbell's arrival in the city from a heavy night out in Hamburg. Without his wallet or phone he busked for three days for the airfare home. As he busked he was gifted alcohol by three returning Danish women, and this is the song of the story. Alcohol also features large in "Johnny McGhee", a self-penned a capella song.

The pace of delivery slows for "Complaint", another original song with a proper folk circuit feel listened to respectfully in true 'unable to hear a pin drop' folk club tradition. Dedicated to Climate Change deniers and written from their perspective, "Climate Change Is Coming (and I don't give a damn)" is a cover of South Wales singer-songwriter Cosmo's original song. It reflects the blinkered view of many in society about Climate Change and just about any other political, environmental or economic topic in these days of division and austerity "what's good for Texan oil sheikhs is good enough for me".

"The Derby Ram" is a traditional folk song from around the mid-18th century. The original tells the story of a massive ram that terrorised the town of Derby, and the difficulties processing its gargantuan carcass. Campbell asserts that while there are plenty of Irish and Scottish traditional songs in circulation, Northern English folk songs are in comparatively short supply. In complete contrast, Campbell delivers a powerful version of Arlo Guthrie's "Victor Jara". Jara was a Chilean songwriter and activist who was murdered by the Pinochet regime. "Victor used to play guitar and write folk songs. But a soldier chopped his hands with an axe and machine gunned him to death so he doesn't play guitar anymore." (The Guardian 2013). It's a reminder that it will always be part of the job of a folk singer to highlight injustices around the world: "His hands were gentle, his hands were strong".

"Purgatory" is delivered as a Gospel 12-bar blues satire, with Campbell drawing comparison between the place between heaven and hell and Klaksvik (a north eastern Faroe settlement), a gag that seems to resonate with the Faroese audience. "Arthur McBride" is an Irish traditional song also known as "The Recruiting Sergeant", about the British Army's recruitment Irish soldiers, and the tactics of bribery used in the process. Staying with tradition, but this time from Campbell's home county of Yorkshire for "The Dalesman's Litany" (formerly The Beggar's Litany a 17th century traditional song). "From Hull and Halifax and Hell, good Lord deliver me".

Continuing the Yorkshire theme and with Yorkshire dialect to boot, "To The Begging I Will Go" is a another traditional song "Of all the trades in England begging is the best for when a beggar's tired he can lay him down and rest" and here concludes with a short Finnish instrumental "Ievan Polkka".

Campbell's own "Wanderlust" reflects his own travels (having played in more than twenty countries) and the songs and influences he has picked up along the way. "Hook, Line & Sinker" provides us with a second mention of Brexit. There are no prizes for guessing which side of the fence Campbell is on, because as a nation we have fallen for it hook line and sinker: "littered with delusions and the hopes of yesteryear".The album concludes with two covers "Dark Streets of Nolsoy" by Shane MacGowan and "Moving On Song" Ewan MacColl.

There's something for everyone in this album, that is, for those who understand protest music and anti-war songs, irony, humour, and drinking songs. It is a truly entertaining work, in the sense that it feels like a night out in a folk club listening to an original artist you've never encountered before. This kind of live delivery is being impacted by pub closures, venue closures, pubs becoming fine dining experiences with music purely for background purposes. Long live the Johnny Campbells of this world!

To The Begging I Will Go