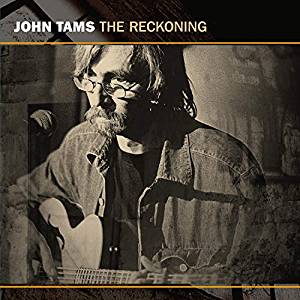 
Some 14 years after its original release, John Tam's award winning, and genre-defying The Reckoning is re-issued, in deluxe form, as part of the Topic Treasures Series celebrating the first 80 years of Topic Records 1939-2019.

The third of his critically acclaimed solo albums, when released in 2005 Tams garnered three BBC Radio Folk Awards, for Best Album, Best Traditional Track and Folk Singer Of The Year. Time has only served to confirm that this was, and indeed remains, a landmark album.

He was a member of Muckram Wakes in the 1970s, then moved on to working with Ashley Hutchings, including a stint as a member of The Albion Band. In the 1980s he formed Home Service. In 2006 as musical director he was responsible for updating Ewan MacColl's original Radio Ballads for BBC Radio

Alongside his success in the folk world, he has a distinguished career in theatre, both as actor and musical director at the National Theatre and Shakespeare's Globe Theatre. His recent work as music consultant on War Horse has received world-wide critical acclaim.

This deluxe reissue contains not only the original 8 tracks, but three bonus songs, two previously unreleased, an extensive 28 page booklet, complete with new sleeve notes written by Mick Houghton, together with a new, brief, introduction from John himself.

With around half of the CD comprising Tams' originals along with a carefully selected set of traditional material making up the other half, there is a fine balance between the old and the new, albeit with the caveat that John's writing is imbued with such a sense of tradition that lines of delineation often become blurred and those unfamiliar with songs from the traditional folk canon might find it difficult to differentiate between the two.

John's distinctive vocals complement perfectly both the dramatic narrative which features so often in his self-penned songs and his interpretation of the work of others.

No stranger to opining social comment, opening track, Written In The Book, is both an autobiographical foray into nostalgia, aging and false dawns, in which Tams sings that 'Lennon and McCartney have a lot to answer for', and also an open condemnation of Thatcherism, 'It's just me and me and me again'.

Safe House, the meaning of which John concedes changes, sometimes homelessness, statelessness, sometimes migrancy, but mostly 'about heart and home', is musically compelling. Over a rhythm track, first bouzouki, then udu, keyboards and guitar all enter the mix, along with fanfare-like cornet and trumpet to create an intriguing sonic soundscape.

A change of mood follows with a beautiful version of the traditional shanty Amelia (aka Across The Western Shore). Surely the theme of love and separation, as manifested in song, is nowhere better expressed than here?

Equally moving is the medley How High The Price?/All Clouds The Sky/St.Hilda's Waltz, which returns to the 'reckoning' motif of the album, which in this set relates to fishermen at sea, and matters allied to the inherent dangers therein. The scant four lines of How High The Price?, words within All Clouds The Sky such as 'The Northern sea knows well the sound of grieving' and the plaintive flugel horn/trumpet of the final instrumental make for an emotive listen.

The Child Ballad, Bitter Withy, which featured on Muckram Wakes' eponymous 1976 album, is updated here with a sound that includes dobro, banjo and electric guitar. The eerie atmosphere created is very much in keeping with the subject matter of this curious song.

The scope and ingenuity of Tams' imagination is exemplified on track 6 as he powerfully recasts the setting of the traditional song A Man Of Constant Sorrow to the 1984 coalfields of Britain, possibly in particular his native Derbyshire.

In addition to the vocals, acoustic guitars, bass, button accordion, synthesizer and foot percussion of Tams himself, further contributions on the original tracks are made by The Reckoning Band, comprising Barry Coope, Graeme Taylor, Keith Angel, Andy Seward, Steve Dawson and Roger Wilson.

The original penultimate track, the 13 minute sequence entitled The Sea, is inspired by the key role that the sea plays in traditional song, and comprises four elements, three songs and a tune. Pretty Nancy, delivered a cappella, is followed by A Sailor's Life, (which itself incorporates the chorus of A Sailor's Alphabet), before the majestic One More Day makes way for the final instrumental As I Looked East, As I Looked West.

Whilst Including Love, a bluesy, swing track heavy on trumpet ended the original release, on this re-issue there are three 'Postscript Tracks' referenced as 'An Appreciation of John Steinbeck'

Sweet Home Oklahoma and No Luck At All are both demos from 2010 and feature Graeme Taylor on second guitar, thus post-dating the The Reckoning's initial release, whilst I'll Fly Away, from John's 1990 archives, is a luxurious big-band interpretation of Albert E Brumley's song, far removed from the version on Plainsong's In Search of Amelia Earhart LP, and featuring some exceptional lead guitar playing from Trevor Dunford.

The Reckoning is an important (re)release from an important artist and warrants a place in the collection of anyone who professes to be an admirer of the highest quality contemporary music, regardless of genre.

Written In The Book