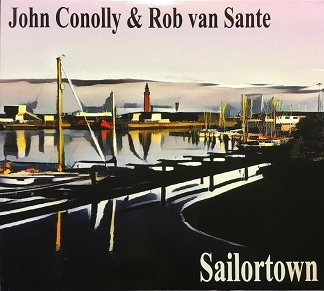 
This latest CD from John Conolly, one of the most steadfast and enduring writer-performers on the folk scene, is a welcome permanent recorded memento of John’s latter-day duo teaming with the guitarist/multi-instrumentalist and renowned producer/engineer Rob van Sante. It turns out that they made the CD primarily to sell on their month-long tour of the eastern United States back in June of this year, but that’s no reason to deny us here in the UK of the chance to celebrate the special character of this continuing musical partnership (which probably dates back around seven years now).

Sailortown is a 14-track collection that revisits several songs from John’s extensive back-catalogue, spanning virtually his entire songwriting career (and including a couple penned wholly or partly by Bill Meek). But these new recordings with Rob are no tired retreads, instead perhaps best described as authoritative and seasoned accounts “from the master’s voice” of songs that stand the test of time and maintain their relevance through to the present day (and beyond).

A significant majority of the CD’s songs concern maritime (or at any rate sea-related) matters – Men Of The Sea, Sailortown and the perennial Punch & Judy Man date back to John’s “Broadside” days in the ’70s; Ranter’s Wharf and The Trawling Trade come from the “Rational Anthem” era; The Taxi-Driver & The Trawlerman’s Wife appeared on John’s Trawlertown collection (as did the traditional Humber ballad of Betsy Walton, also reprised here). The boisterous yarn of The Jolly Tar is a setting of R.M. Ballantine, and the folklore of Eggshells comes from an Elizabeth Fleming poem. Flowers Of May, however, is a much newer song, written for the Harwich Shanty Festival to celebrate the port’s connections with the Pilgrim Fathers and the Mayflower voyage, and Tommy’s Gone Away To Iceland was inspired by John’s involvement with a NFHC video project.

John also treats us to fresh accounts of two of his very finest creations: The Last Ploughshare (a plea for the human race to care for its habitat, written in the aftermath of the first Gulf War and still chillingly apposite) and The Widowmaker (where a fisherman’s wife lies awake to the sound of the bitter North Sea wind of that name). No matter that several of the above songs have been occasionally revisited on John’s various CDs over the years – this is proof indeed that these old songs are worth their salt (if you pardon the mashed-up mixed-metaphor!). The disc’s menu is completed by a stirring rendition of the traditional Irish patriotic song My Own Native Land, which John tells us was “recalled from a memorable performance by the wonderful McPeake Family”.

As well as Rob’s tastefully underplayed underpinning accompaniments (guitars, bass, bouzouki, keyboards), there’s some selective backing from Janie Meneely (on whistle and concertina), and companionable backing vocals from both parties. Sailortown is an attractive and unpretentious CD, full of old-fashioned craft, good songs and straightforward, solid performances. Long may John continue to entertain us so royally.