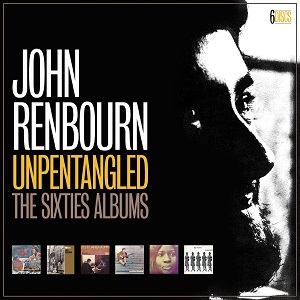 
John Renbourn came to the wider public's attention with his role in Pentangle alongside Bert Jansch. While the latter's work outside of the band has gained many plaudits from fans and fellow musicians alike, Renbourn's music has been rather underplayed given its influence and quality.

As ever, it's a moment for Cherry Red Records to state his case for similar praise with their release of the six album box set, 'Unpentangled'. Or, at least, for them to highlight his releases in the 1960's as the sub-title of this box set suggests. It comes with a comprehensive booklet that tells of John Renbourn's early life and the subsequent musical paths that he took before he became well and truly Pentangled.

As we'll see, those paths crisscross each other as time goes by. The first recording in this set finds Renbourn enchanted by the vocal of Dorris Henderson who he met in 1964. When he heard her blues and gospel qualities, it seemed natural that they work together leading to their first record, 'There You Go!' It gathers up the material that the pair were playing around the burgeoning folk club scene. In Renbourn's words, it's "a bit of church, a bit of blues" drawn from traditional song on both sides of the Atlantic with what was soon to become the obligatory Dylan cover, 'Mr Tambourine Man'.

Perhaps oddly, just a month later, Renbourn's self-titled first solo record was released. It appears as the second recording in this box set and mostly gathers up demos that Renbourn had recorded after hours in Soho. Some tracks capture his early pairing with Bert Jansch in what would become an intertwined career across a range of releases.

This relationship is made most clear on the mainly instrumental 'Bert and John' which makes for the third release on this anthology. With titles often made up on the spot and music that was largely improvised, the recording captures two great guitarists bouncing ideas of each other as well as drawing from those around them on the folk circuit. Typical of their intertwined relationship, 'Waggoners Lad' is included as a bonus track though it originally appeared on a Bert Jansch album. Indeed, listeners with keen ears will recognise how the track also influenced Led Zeppelin on 'Bron Yr Aur Stomp.

The fourth recording in this collection, 'Another Monday', was Renbourn's second solo album. Whilst it draws on his beloved blues, we hear the seeds of musical change with tracks like 'Lady Nothinge's Toye Puff' drawing from Elizabethan music. Most importantly, with Dorris Henderson back in the USA, Jacqui McShee steps up to the vocal microphone on three songs. One being another song later picked up by Led Zeppelin, Blind Willie Johnson's 'Nobody's Fault But Mine'.

'Watch the Stars' is the fifth record in this set and the second pairing of Dorris Henderson with Renbourn though only credited to the former. She had returned to the UK to find that the folk scene had exploded with Renbourn busy with many other musicians. This led to the appearance of Danny Thompson amongst others as well as Henderson contributing three songs including a co-composition with Anne Briggs, 'Mosaic Patterns'. Added as a bonus track and originally released as a single, Love's 'Message To Pretty' highlights not only the folk rock sound that was developing but how inspiration was spreading across the music scene in a variety of directions.

As if to prove the rapidly diversifying influences within the music scene of the 1960's, the final recording in this anthology gathers up Renbourne's 'Sir John Alot Of Merrie Englandes Musyk Thyng & Ye Grene Knyghte'. Inspired by Arthurian legend and with Renbourn on guitar, the album features Terry Cox on finger cymbals, African drums and glockenspiel with Ray Warleigh on flute. This esoteric combination captures the more hippy, trippy sound of folk at the time and the astute reader of this review will recognise that all the component parts of Pentangle are now in place.

So, what of this box set as a whole? Not only does it capture one of the finest guitarists of this generation but it also shows how the building blocks of Pentangle came together. Listeners might be attracted by the development from the folk blues style, its changing influences or simply the guitarwork on show and, as usual, Cherry Red act as excellent guides along this historical path.