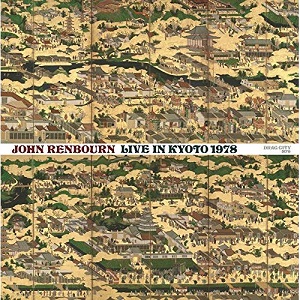 
It’s three years since the passing of Pentangle’s co-founder, who with the late Bert Jansch produced some of the most exhilarating and innovative fusing of folk, jazz and classical musics of the 60s. He was still going strong and touring right up to his death.

This latest release provides a memento of one of John’s finest live dates, one that has lingered in the memories of those who were fortunate enough to attend. This performance took place in a coffee house in Jittoku, Kyoto (Japan) on 30th May 1978, and forms a perfect demonstration of his talents. It presents a sequence that proves the sheer breadth of his repertoire. Which spanned folk, blues and beyond – to deliberately quote fellow-traveller Davy Graham (whose masterwork Anji naturally trips off John’s fingers quite early on in the set. The sheer ease with which John switches between styles and traditions would be impressive even if his technique were not as brilliant as it is – but the whole package is a killer.

During the course of a total of 13 items, John moves through the years, including (as he admits in his between-song intros) items he’d not played all that often (like I Know My Babe, which he got from the singing of Barbara Dane) or for some while (like the renaissance pavane The Earle Of Salisbury and the nifty flute tune Transfusion by Charles Lloyd). Whether on a tricky instrumental like Anji or accompanying himself on The Cuckoo, John’s fingerwork is stunning and still takes your breath away, however many times you replay it. Other standout moments include compelling accounts of traditional songs Banks Of The Sweet Primroses and So Early In The Spring; a cheeky coupling of John Barleycorn with the medieval dance La Rotta; the ingenious medley of Lamentation For Owen Roe O’Neill with The Orphan and The English Dance; and a neat interlude (a transposition of the American fiddle tune Peacock Rag), although to be fair there’s not a single remotely average rendition in the entire set.

The recording is superbly detailed, and faithfully captures all the wonderful intricacies of John’s playing. The only noticeable audience noise is some whooping and clapping-along during the medley, and some very generous applause leading onto the encore pairing of Gypsy Dance and Jew’s Dance (described as “slightly insane tunes” composed by German lutenist Hans Neusiedler); the crowd was clearly hooked and totally enraptured.

For all it’s 40 years old, this gig represents timeless music-making that will never date. Totally captivating, in other words.