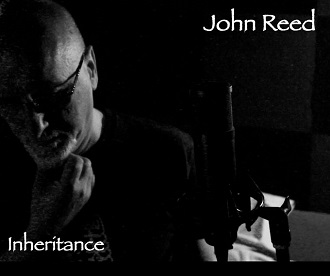 
Having railed at some length about today's social, economic and political injustices on his last album Breeding Ground of the Vile, the Manchester-based singer-songwriter takes a more personal tack with this predominantly acoustic set, the instrumentation built around his 1970s vintage black Eko Ranger guitar and augmented with cittern, lap steel, keys and strings. Naturally, being Reed such autobiographical reflection and introspection is still set against the world in which we live, dating back to 1977, the opening track, the trad-coloured 'Some Days', is a brooding, rumbling number about the highs and lows that afflict us all ("some days I'm ten foot tall, some days I'm ten foot small") and the seeming impossibility of overcoming a sense of despair and impotence ("I'm thirsty but the taps are dry"), tempered with the determination not to give in ("too brave to jump, too stubborn to fall").

Delicately fingerpicked with pulsing bass, 'Connachta' relates to Reed's Irish ancestry in a number that looks back at the Potato Famine of 1848 and the deaths and the scatterings that ensued as it reflects on the importance of Manchester, Liverpool and the banks of the Clyde in Glasgow in relation to the influx of Irish workers looking to carve out new lives.

Opening on a busy repeated riff and backed by violin, 'Silhouette' recalls his earliest memory, of the only time Reed ever saw his Scottish grandfather, standing in the open door of the house where he lived, the number extending to talk of how he was always taking his leave ("Siblings in their summer clothes/Went running after him/With a precious gift of half a crown/John Baird was never seen again").

Inspired by his producer (and bassist/keyboard player), Ali Karim Edmaail, 'Maker', with its circling guitar pattern and where those Roy Harper echoes surface strongest, is essentially about putting your trust in others to guide you through the troubled waters of life, or indeed the recording process. By way of something different, however, led by plangent guitar and complemented with violin, 'Montevideo' offers a historical narrative about the sacking of the titular city and the massacre of its defenders during the Napoleonic Wars, but even here there's personal connection as his paternal ancestor John Cofty was among the crew of The Lancaster, a merchant ship pressed into service of the King.

The same century and a connection with the sea underscore 'The Top of the Stairs' which, gathering around hovering cittern and a steady single percussive beat, is based on the life of his Great Great Aunt Christiana in Liverpool making "Pastries for lodgers/To make ends meet", her four marriages reflecting on the short-lived happinesses of mariners' wives ("Another family grieves/A widow weeps/Another suitor stands and stares/From the room at the top of the stairs").

'Peace' brings the album back to a very personal note and the trauma of coming close to losing something dear to him as he sings "Why would you ever take for granted anything you have/Or imagine grass is greener on the other side/Why would you follow stars when they are right there next to you". The theme of loss is also prevalent on 'Inside', although here it's about how age and illness conspire to stop you doing the things you love and how, whether it's a holiday in Corsica, a trip to the cinema or just lying on the lawn in the sun, you end up able to go there only in your mind.

Heading into the final stretch, 'Woodpeckers' concerns an incident that day after his mother's death when forest rangers arrived to take down an old cherry tree the roots of which were now "strangling the culvert" and, as he looked at it, he saw on its branches "two woodpeckers staring in at me", such a sighting rarely observed, as if the spirits of his mother and late father were come to visit and bid farewell.

The album's actual protest song comes with the sparsely arranged, wheezing musical ebb and flow 'Our Time', which, chiming with the sentiments of Extinction Rebellion, is an environmentalist reminder that "We're tenants of the air we breathe/Custodians of this land" and that "Our time has come".

It ends with the near seven-minute 'Tablets of Stone', a sort of personal Ten Commandments (or as he has it Highwayman, War and Peace, Holy Bible,Tolkein trilogy or Grapes of Wrath) that has him imaging the aferlife, on a cloud or in the fiery furnace, reflecting on his life and how, "a poor boy froma big Catholic family, he's lived it, which takes a swipe at the forces dividing our communities and souring the world for our children, wishing that "those who embezzle and profit/From misfortunes that others" may "drop a live wire in the bath", that those who have been "deluded, duped and defrauded" will wake up to the realities, that the "disingenuous divas/Who gambled our pensions and savings/Who promised the earth but dished only dirt" will be driven to madness and ending in a curse upon all the abusers, the miscreants and liars that make the common man and woman's life a hell on earth.

It may be called Inheritance, but it's a worthy legacy too.