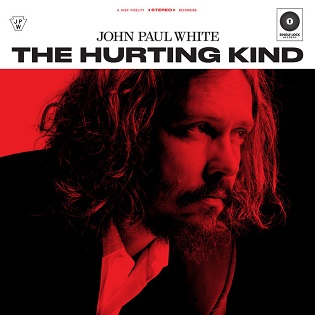 
I have to confess I was never sold on either of White's two solo albums following the break-up of The Civil Wars, both of which flirted with soul and blues but had no real sense of direction. This, however, is a different animal.

Firmly embedded in classic country history with lashings of twangy guitars and pedal steel, to the extent of featuring co-writes with Bill Anderson and Bobby Braddock, it's a musically cohesive affair that, produced by Ben Tanner, draws on such influences as Jim Reeves, Patsy Cline, Chet Atkins and, especially, Roy Orbison, spookily channelled, Erin Rae on backing vocals, on Anderson co-write 'I Wish You Could Write You A Song', White's soaring tenor a dead ringer, if perhaps not quite so deep, for the Big O's.

Mandolins, fiddle and electric guitars introduce the album with 'Good Old Days', a rock tinged alt country number that talks of the trend for misty eyed nostalgia in response to the current political climate as he sings "tell me what's so good about the good old days." The album's honky tonk sensibility makes its first appearance with the slow waltzing 'Heart Like A Kite' with twin lead guitars, pedal steel, fiddle and vibraphone and The Secret Sisters on backing, keeping the sawdust floating in the air with the old school strains of 'Yesterday's Love' and, another Anderson co-write with Rae again on backing, the reverb and piano-led country waltz of 'You Lost Me', White's voice soaring up the scales to falsetto heights as the fiddle brings partners on to the dance floor.

There's a rockier approach to 'The Long Way Home' with twin electric guitars and a steady drum rhythm from both Jon Radford and Reed Watson on drums while Ben Tanner provides the piano frills, its bluesy undercurrent also permeating the easy swaying cruel love title track. Radford's drums, timpani to be specific, are again to the fore on the 60sish opening of 'This Isn't Gonna End Well', a sort of meeting between Spector and Orbison, which, written with Braddock, is a duet with Lee Ann Womack laced with strings and pedal steel.

It ends with, first, 'James', a sadness-hung, issues-shaded number about the titular narrator, a former marine, being bent into a machine and then spit out when there's no further use for him, the bittersweet lyrics hinting at Alzheimer's in its final line of "Haven't we already met/It seems we have the photograph/Sitting beside my bed."

The closing number, 'My Dream Have All Come True', another baritone guitar and fiddle country waltz, returns to soaring Orbison echoes, the break-up lyrics serving a bitter reversal of what the title suggests.

In returning to the well and drinking from the source of classic country music, White has got his mojo back and produced the best work of his career to date, The Civil Wars included. It hurts so good.