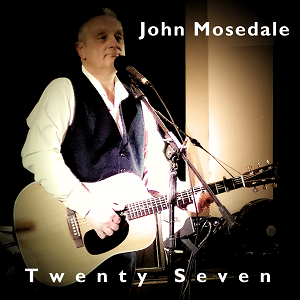 
"Twenty Seven" is an EP of gentle humour songs that essentially relate the story of an older man looking back on his life. It is a self-reflective and self-deprecating EP that will resonate with many of his peers. As someone who will be 61 next month, "The Old Man in the Mirror" sets the scene. Inside we still think we are teenagers, but at some point as we plough through middle age we find a balance that still allows us to act like teenagers while maintaining the dignity and sense of responsibility of an older man. Mosedale describes the experience to perfection in this reflective tale of each of us, as we find we can't do all the things we used to as often as we want to do them.

"The River of Life" continues the reflective theme, because we all follow conventions as we try to battle our way through our earlier lives, only to find later that being true to ourselves is the only way forward. "My Dog Has 3 Balls" is a double-entendre song in the seaside postcard, Jake Thackray tradition, and very much a song for enjoying as part of a live performance. Jasper Carrot once mused that he would use an entire lifetime of material in a 40 minute TV show, and for me that is always a danger with comedic recorded songs. That could also be a Victor Meldrew thing on my part!

"Four Left Feet" is a metaphoric and rather touching song that uses a first dance as a way of describing those awkward moments at the start of a relationship. You want to make the right impression when you have finally plucked up the courage to ask. "Twenty Seven" (Live) compares apparent female ostentation to the frugal, typically male approach to the world of fashion and life. Again, personally reflectve, what he misses is the number of times he might have been out with his mates in the pub while she was back home looking after the kids or hosting Tupperware parties!

Co-produced by Richard Digance, who also plays supporting guitar on some tracks, this is an EP of no frills, honest, singalong folk songs.