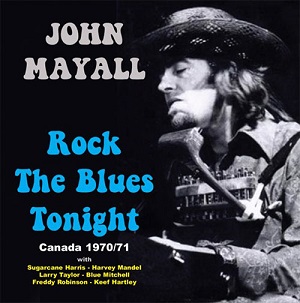 
This two-disc set is a reissue of an identical package that came out on Castle/Sanctuary in 1999 – but it’s a good ’un!

The story goes that a batch of bootleg tapes made by house sound technicians at various Mayall gigs from 1970 and 1971 suddenly came out of the woodwork in the late-90s, and that Mayall himself approved and selected the “salvageable” portions of these tapes for release. These are historically important recordings, dating from the period September 1970 (five tracks) through to April 1971 (six) and “late-1971” (the final three). The guiding spirit of all these live recordings is much in the manner of the then-just-recently-released guest-name-dropping Back To The Roots album, with a distinctly loose feel to the music-making. Here, Mayall’s latest “new band”, initially drummer-less, comprised inventive guitarist Harvey Mandel and reliably creative bassist Larry Taylor (both ex-Canned Heat) and of course Mayall himself. Then, from late-1970, he took the music more into blues-rock with the addition of distinctive, sparky electric violinist Don “Sugarcane” Harris, and in early 1971 also bringing in Sugarcane’s drummer Paul Lagos. Later that year, he replaced the whole crew with bassist Victor Gaskin, drummer Keef Hartley and guitarist Freddie Robinson, with Fred Clark on tenor sax and the Blue Mitchell on trumpet completing the lineup; you can hear these players on the final three tracks of this set (these stage performances preceded the release, in 1972, of Mayall’s Jazz Blues Fusion LP which boasted an even more expanded lineup). So, this is a valuable set for its documentation of a very much transitional period in Mayall’s career, and much of the soloing is genuinely stunning (great to hear Sugarcane outside his classic recordings with Frank Zappa), although even staunch Mayall fans may find two versions of the 20-minute jam Possessive Emotions (albeit with different successive lineups) a bit too much. But yes, there’s sufficient worthwhile archive music-making here to warrant purchase.