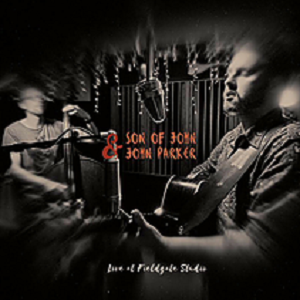 
Back in May 2016 I was lucky enough to review 'Autumn's Hymn' the debut album from Son Of John, aka Jacob Johnson and, amongst other things, remember being struck by the records poise, contemporary sense of tradition and creativity. Factor in a great voice, fluid guitar playing and several songs that any writer would be proud of, and it added up to a fine piece of work indeed.

Whilst guitar and voice were at the heart of the debut record, the sound was fleshed out with harmonica, electric guitar, bass and percussion, but for this EP the aim was to go back to a more basic, core vibe of stripped down acoustic music. Jacob was joined by double bassist John Parker, a former member of the inimitable Nizlopi, and the 5 songs here were recorded live at Fieldgate Studios in Cardiff by Andrew Lawson, mixed at Load Street Studios by James Delin and mastered by Matt Fisher.

'Live At Fieldgate Studio' reworks 2 songs from the first album, has 2 traditional numbers and, I believe, a previously unreleased original track.

Opener 'Wild Bill Jones' enters on Jacob's guitar like a possessed Nick Drake out-take before it morphs into Richard Thompson 'Vincent Black Lightning' territory, all the time both supported and propelled along by the driving double bass from which John Parker teases the most amazing sounds, bowing, plucking, sawing and down right thrashing to remarkable effect. The vocal sits perfectly in the mix, markedly more husky and world weary than on 2016's debut album but ideal for this traditional song with its rural Americana, Appalachian heritage.

Original track 'The Waves' is a slower, stately affair, beautifully performed and full of rich, sea faring imagery punctuated with ageless guitar fills and runs that lend a very traditional texture to the song.

Rhythmically 'American Progress' is fairly faithful to the album version but has new life injected with its lovely double bass underpinning and starker sound, whilst 'The Maid & The King', again from 'Autumn's Hymn', capitalises on the space to rise to new heights of beauty confirming it's status as a truly great folk song.

Last up is the ubiquitous 'John The Revelator' that's given an austere treatment here, gravelly vocal over John Parker's double bass lines, fills and percussive thumps, which leaves plenty of room for Jacob to play with the melody and bring a fresh sound to this much played old standard.

Only available at live shows, this EP serves as a perfect bite size introduction to Son Of John and for those that already have the full length 'Autumn's Hymn', this duo line up with double bassist John Parker has more than enough going on to warrant buying both.

As with his debut album, the playing is faultless, the original songs outstanding and, if anything, the intervening 2 years have rendered Jacob's voice even more distinctive.

All in all, a lovely little collection that heralds great things for the next album.