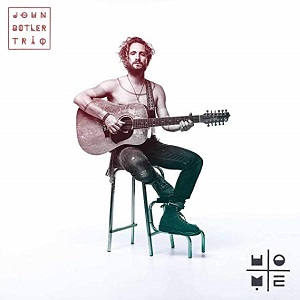 
Around twenty years and six studio albums into their career, Australian Roots - Rock band the John Butler Trio have taken something of a different turn with their latest album 'Home'. While continuing to create as a trio, John tells us this record was largely recorded and produced in a more solo format with long time friend and producer Jan Skubiszewski and, accordingly, is a more personally reflective work. We are told that, 'Whilst exploring this inner world Butler also traverses new sonic territory, amalgamating his love of electronic and hip hop production with the folk and country instrumentation and song writing traditions he has has for so long been inspired by'.

On to the record then, and opening track 'Tahitian Blue' enters on an echoey, banjo sounding riff before the full instrumentation appears doubling the melody and then it's John's vocal, which is also multi tracked and treated, all of which lends the song a catchy, atmospheric feel.

'Wade In The Water' is similarly atmospheric, all doom laden drums and guitars that phase in and out in a way that put me in mind of U2's 'Bullet The Blue Sky', and with a strong vocal buried deep in the mix it's the groove that pushes the song through.

'Just Call' is another hooky, acoustic riff led number and the sparser, rhythmic 'Running Away' leads into the title track 'Home' which starts off like a 'Prodigy' outtake before settling into itself and is perhaps the most obvious nod so far to the 'electronic and hip hop production' mentioned above. The promotional video of 'Home' has certainly divided his fans with many bemoaning it as a creative shift too far, but I think they are likely to gain some comfort from the following three songs that sit in the middle of the album and perhaps sound most like the John Butler Trio they are familiar with.

'Miss Your Love' starts with an acoustic guitar strum before the band crashes in with John's voice sitting nicely on top of the track and 'Faith' is propelled along with an urgent, picked acoustic riff under which the song builds sensitively with some particularly fine, sympathetic drumming to the fore. The third piece in this album mid section is the simply stunning 'Coffee, Methadone & Cigarettes'. To my ears, everything about this track is marvellous. The deeply personal lyrics are made even more pertinents by their simple directness, musically it builds and layers without a hint of bombast and the vocal from John is heartbreaking with its tone sitting somewhere between the timbre of Bruce Springsteen and David Gray, all of which is recorded with elegant clarity.

Of the remaining four songs, other stand outs for me are 'Brown Eyed Bird' which marries acoustic picking with a programmed sounding rhythm track before its big chorus and 'You Don't Have To Be Angry Anymore', which has similarly quirky instrumentation and swaggers through on another fullsome sound.

In taking so many artistic risks John Butler has not been resting on his laurels with this album, and early response to the promotional material already released does suggest it is going to polarise his fans. For me, whilst many of the instrumentation and production values are clever and interesting, others are to the detriment of the songs, particularly in the way John Butler's voice is treated. Quite often it is buried deep in the mix with a multi layered and tracked effect that sometimes means the lyrics are largely indecipherable and any recognisable traits of his voice are removed, to the point it could be anyone singing. Given that a lot is made of this albums material being both personal and significant to John, it seems slightly odd that some of the production values effectively depersonalise the content. However, there is also much to be enjoyed here and in 'Coffee, Methadone & Cigarettes' boasts what will undoubtedly be one of the stand out songs of 2018. I note also that the John Bulter Trio are being temporarily expanded with another couple of members to make it the JBT+ band to tour 'Home', and I imagine these songs live will truly find their natural setting.

Wade In The Water