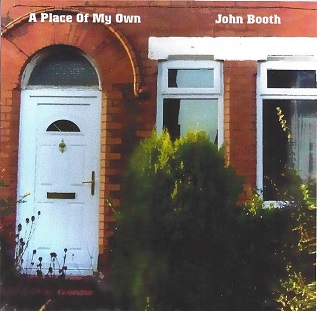 
Although he's played with a variety of folk outfits and previously recorded material on two albums with his late wife Ailsa, this limited edition release marks Sheffield-born/Northwich-based Booth's solo debut. The songs date back over the years, some even to the last century, and, recorded here with the assistance of producer Daniel Lagan on drums, and contributions by Sophie Pickering and Ian Parr, it's an often gently bucolic affair with numbers like 'Robin' (a celebration of the emblematic British bird), 'Winter Is Coming' and the fingerpicked 'I Don't Mind The Rain' conjuring an image of someone who enjoys pottering around the garden (as the back cover suggests) or soaking up the countryside.

They're simple songs that touch on core emotions of love, company and somewhere to belong, the chorus catchy 'Room With A View' opener having a definite touch of Dire Straits to the guitars and melody with a lyrics that contrasts what we look for ("all I ever wanted was a place of my own, for friends to call round for a beer") and how we end up settling for something else ("a room with a view, but what I want is a door").

If Knopfler's a touchstone here, elsewhere you may find yourself thinking of Cat Stevens ('Storm'), Ralph McTell ('That Sort of Day'), Roy Harper (the atmospheric nine-minute 'One Step' with Parr on Stratocaster) and Dylan (the plangent guitar and harmonica of 'The Strongest of Hearts').

The sprightly acoustic fingerpicked reel-jig 'Sparky The Explorer/The Lamb's Tail' spotlights his instrumental versatility while Pickering provides harmonies for the life journey metaphor 'The River' and duets on the lovely, hand percussion, 60s folksy tumbling call and response 'Equal Be' with its call for equality not privilege, a social commentary theme also underpinning 'Who We Are', an orchestrated number about everyday angels.

On the insert he says he assembled the tracks for his own pleasure, but hopefully they'll please others too. They will.