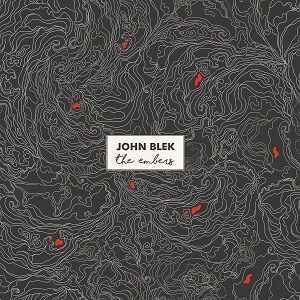 
John Blek has the clear voice of early Tim Buckley with a touch of Ryan Adams. His guitar and the minimal brushed drums on u"Empty Pockets" creates an intimacy that draws you in. "Death And His Daughter" has a trad folk feel, with some intricately picked guitar and another uplifting vocal. "Ciara Waiting" has that sleepy Tim Buckley Scott Matthews slightly melancholic vocal. "Flame" adds a minimal hand clap beat to the guitar and crooned vocal, maintaining that stripped back vibe. The instruments are mood dressing around the swooping instrument that is John Blek. THE EMBERS is the fifth solo album from this self professed Journeyman singer songwriter and guitarist from Cork.

"Old Hand" is an aptly named nimble instrumental, two minutes of guitar bliss. Aptly named because it glows with the grace, pathos and timelessness of classic John Renbourn. "Revived" is a more contemporary chilled gospel piano ballad, a duet with powerful vocalist Mick Flannery. As powerfully fragile and brooding as Anthony And The Johnson's this is an inspired pairing with the two voices complimenting each other perfectly. The lyrics are hymn like and the performances are biblical, Matthew Berrill's clarinet providing a touch of light and grace. "Hell Or Highwater" is another transcendental shimmering vocal over a liquid guitar and languid drums, bringing a touch of 4ad styled space and atmospherics.

Truly uplifting. "The Haunting" has a cracked pleading vocal, its classical picked guitar and huge piano notes making it sound like something off a forgotten 70s psych folk classic. "Walls" uses a delayed guitar, part John Martyn, part Durriti Column or Dean , to build a cathedral like atmosphere with John's voice filling the space created. The music is contemplative and the lyrics thoughtful. Listen to this last glorious track for an glimpse if what THE BENDS era Radiohead would have sounded like channeling John Martyn's One World. The cover with it's mix of ancient and modern, digital Victorian book cover marbling, or a computer rendered map, perfectly sums up the album. Martyn himself in 1970 sang, "And every day is just a joy to hold. The needle is new and the patterns are old ". If like me the name John Blek is a new one then you are heading off to buy up his back catalogue and also check out Mick Flannery.