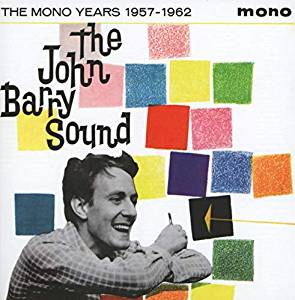 
That’s John Barry the celebrated British film composer, the most famous of whose compositions included the iconic James Bond Theme and Hit And Miss, the theme tune for TV’s Juke Box Jury. But there was a lot more to him that that, for he and his group, The John Barry Seven, were something of a “name” commodity and to some extent something of a “go-to” act. They backed Adam Faith and a number of other artistes from the EMI stable, thus were rarely out of the charts, and yet paradoxically, at any rate from a PR perspective, the individual band members were virtually unknown, compared to the individual members of high-profile acts such as The Shadows (even today, you’d be hard pressed to name even one member of the JB7 unit aside from John their leader, even though many musicians passed through the ranks during the group’s eight-year existence).

When John formed the band, his rationale was to present an anglicised version of rock’n’roll to the British public. Hence, the very earliest band records sounded much like a pale imitation of Haley & The Comets without much in the way of charisma. After some appearances on the Six-Five Special TV show, however, and quickly dropping John’s own inadequate vocal contributions from the act, the JB7 concentrated on instrumentals, from the fourth Parlophone single onwards featuring mostly John’s own compositions. These were quirky, often specific in mood or tone, and quite often the titles were the giveaway (Rodeo, Pancho, Hideaway etc). In keeping with John’s increasing ambition to become a film composer, many had an exotic flavour (eg western or Latin American), while others (Long John, were rocked-up classic or popular tunes. Some occasional, respectable enough covers also slipped in.

Few of these 45rpm sides lasted more than a few seconds over two minutes, so were ideal for the “quick impression” demands of the singles market of the late-50s/early 60s. And at the same time, the melodious twang-guitar was becoming the dominant instrument in the band’s arrangements, in keeping with the then-current vogue. John developed the knack of writing catchy melodies too, as cuts like Snap ’n’ Whistle and For Pete’s Sake proved. A step forward in success terms went with the consolidation of the group sound following the recruitment of guitarist Vic Flick and keyboard player Les Reed, and the revamped JB7 went on to produce a large number of classic sides for Columbia. For many of these, the JB7 was augmented by a four-piece string section playing pizzicato, and this expanded sound was to become much of a JB trademark (think also of all those Adam Faith hits!), indeed something of a predictable formula.

Even so, covers of Blueberry Hill, It Doesn’t Matter Anymore and Walk Don’t Run (the latter a chart hit at the height of the “guitar instrumentals” craze) still kept the high standard, while there were also a few curiosities (Watch Your Step, Twist It, Man From Madrid) which due to the presence of Les’s ear-piercing claviolet sported something of a Johnny & The Hurricanes feel. While at the same time, John’s cinematic leanings were appearing on sides such as the Mood sequence, Never Let Go, The Challenge and a number of bespoke film themes. Then came the pinnacle with the full-length album Stringbeat, a more considered project that capitalised and consolidated the now-trademark JB sound. That disc – unlike virtually all of the group’s previous output – was issued in stereo too.

However, this three-disc box-set is truly exhaustive, since it contains, exclusively in glorious mono, every JB recording – all the A- and B- sides for Parlophone and Columbia, as well as a number of serious rarities and Chappell Music Library recordings, the Beat Girl film soundtrack LP and the entire Stringbeat album. Sound quality is splendid too, and the accompanying booklet contains a fine 16-page essay (adapted from the authoritative book of the group’s history by Geoff Leonard & Pete Walker) plus details of recording dates and a host of archive photos.

Another valuable set from Él Recordings that fills a specific niche in the market, and does it definitively.