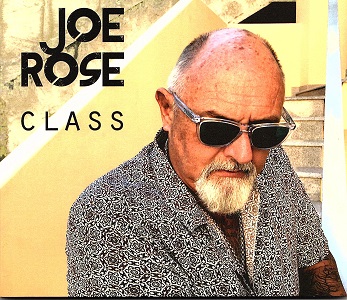 
I was not sure what to expect from this CD when it dropped through my letterbox last week. I had never heard of the singer although reading the track list I thought that there was a good chance that I would like it. I am a fan of both musicals and modern "classics" so the listing appealed to my musical tastes.

Joe Rose's story (real name John Froggett) is worth briefly telling here too. He is an accountant who was discovered by the head of Folkstock Records, Helen Meissner. She was so enamoured with his voice that she signed him up and then married him too. He still carries out a bit of accountancy work but I fancy that he will have little time for that in the future if this album is anything to judge him by.

This redirection of career reminds me of two others that have made the change to singing from unrelated beginnings. Older music fans will remember the transformation from bus driver to international singing star of the sublime Matt Monroe. Joe includes one of Matt's songs on this album. Russell Watson also transferred his skills from the welding workshop to the recording studio. If Joe can match their success, he will be very pleased.

So, on to the album "Class." It contains a very good mix of show songs and immediately recognised covers of songs by Neil Diamond, Tom Jones and Andy Williams amongst others. He also covers a couple of songs from the now departed Joe Longthorne who earned a reputation as a supreme cabaret and performance artiste. I believe that Joe Rose could achieve the same level of success.

A recent newspaper article stated that "Joe has a world class voice" and whilst I would not fully endorse that statement, he does have a very good voice and has chosen his songs well. The album opens with one of my all time favourite musical refrains, "Bring Him Home" from the magical Les Misérables. Although Joe's version does not hit the dizzy heights of some other versions that I have heard, he certainly does it justice. He does likewise with "Music Of The Night" from Phantom which he sings with great conviction and passion. To my mind this is the best track to showcase Joe's voice.

At the risk of upsetting lots of followers, I have never been a big fan of Neil Diamond. However, Joe's version of "Hello Again" has made me listen to the original again and I now appreciate it far more than I had previously. Once again, Joe covers this with aplomb.

With fifteen tracks on offer here, it is inevitable that there are a couple of songs that I am not keen on, but I will keep those to myself in case I upset a few more music fans.

Overall, this is a delightful debut album from a guy that will bring joy to music fans of this genre. It is beautifully produced and the orchestration is superb and I have thoroughly enjoyed listening to it. As I write this, the theme from Love Story, "Where Do I Begin" is playing and it seems an apt place to finish my review on. As the title states, this is CLASS.