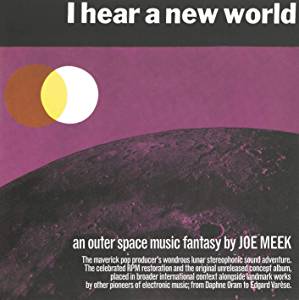 
The legendary maverick pop producer Joe Meek was unquestionably responsible for a great number of the most memorable records of the early 1960s. His obsession with electronic gear and the potential for oddball studio geekery produced unearthly studio innovations that were nothing short of visionary, and paved the way for many of the technological advances in record production of the later years of the decade and indeed ever since. Meek’s name became synonymous with the term “space age” – his signature hit being the Tornados’ Telstar of course – but there was much more to the trademark Meek approach for, as countless compilations have revealed and studio archives have unearthed, as his sonic tentacles have been heard to penetrate many other less expected corners of the record catalogues. And it’s not quite as widely appreciated that Meek’s emergence into the blinding light of pop music was not an overnight result of an isolated lightning bolt of creativity, but more the culmination of a period of musical experimentation that he’d been clandestinely carrying out in an eccentric home studio environment.

All of which begs the question of what had inspired Meek to doggedly follow this wilful individual path, and how his personal eccentricity had developed and then been creatively harnessed into a major creative force which, though often maligned and misunderstood, would influence the future of music. A question which this useful set makes a serious and most creditable attempt to answer, and provides much food for thought as well as some very intriguing listening that really does open up the mind.

The obvious selling-point for this box-set – and let’s face it, the principal interest for pop fans – is this reappearance on CD of Meek’s original unreleased concept album, which was recorded mostly in Meek’s home studio during the course of 1959; this is identified as a direct copy from a 1960 white label pre-release of the LP on Triumph Records (and would appear to be identical with that issued with Barry Cleveland’s book in 2001). Alongside this is presented “the RPM Restoration” of the album, listed as a “sound restoration completed in 1991 by Dave Richardson at SRT Studios, Cambridge” and issued on the RPM label in that year. Unfortunately – and especially so considering the focus of this set and its emphasis on the revelatory nature of this concept album – the booklet notes don’t furnish us with any significant background information on the suite itself, its composition or creation, or any further information regarding the differences between the two versions, or indeed the circumstances surrounding the restoration or any discographical detail concerning the previous reissues. The “restoration” does, however, sport a partially revised running order, and there are (naturally) advances in sound reproduction, clarity of parts, stereo imaging and perspective. But it’s symptomatic that it’s the original that matters.

Confusingly, what is not made clear (or for that matter even mentioned) here is that of the original 12-movement suite, only “part 1”, a four-track EP, was actually ever released by Triumph, and it is the back cover of this EP that is reproduced for the booklet. Meek’s own liner note reads candidly thus: “This is a strange record. I meant it to be. I wanted to create a picture in music of what could be up there in outer space.” The ensuing paragraphs are almost apologetic in insisting that the musical “fantasy” be treated as entertaining and different rather than educational, while it also purports a secondary purpose as a stereo demonstration disc. The four pieces therein (not the most interesting of the 12, by the way) are then described in schoolboy-friendly terms. The performing credit is to “The Blue Men directed by Rod Freeman”, a skiffle-rock’n’roll combo of Meek’s acquaintance. And what of the music itself? Well to be sure, there are ideas and sounds which are recognisably from the same home-made schlock-stock as some of the effects which graced Meek’s later pop hit productions and other discs viewed (somewhat unfairly perhaps) as mere pop novelties. Here, would-be-tacky touches like the cheeky Johnny Cash and twangy surf/Hawaiian geetar riffs are actually rather fun and may well sort-of conjure up visions of space-horses gallopin’ across the moon prairies and suchlike! Yet the suite is not without its embarrassing moments, naturally – like the twee, cheesy munchkins-on-acid vari-speed vocal treatments and gloopy watery Bleep & Booster noises. But then again, there’s also some quite sophisticated musical ideas and specific techniques of the electronic studio which are like variations on cutting-edge methods and gestures being essayed by “serious” electronic music composers at that time. So all in all the “concept album” is worth exploring, and much of it still conveys something of the sense of wonder and “boy’s-own” adventure in the spirit with which it was constructed by Meek.

Which brings me to the admirable perspectives and contextual insights afforded by the remainder of the music contained on the three discs in this set. Detailed discussion of individual items is neither necessary nor appropriate here, but suffice to say we’re presented with a cornucopia of pioneering electronic music pieces from the late-’50s through to the mid-’60s. With hindsight, some may now sound quite primitive or tentative, but that’s only to be expected. Disc 1 is topped up with some typically quirky items of “process” or intermission music from the early days of the BBC Radiophonic Workshop (sadly not including the Dr Who theme, however, which came slightly later) as well as both sides of an intended-hit-single by “Ray Cathode” (involving George Martin!). Disc 2 features landmark musique-concrète and tape pieces, some also involving orchestral players, by composers both famous (Milhaud, Messiaen, Stockhausen, Boulez, Pierre Henry) and obscure (Dissevelt, Luening), while Disc 3 continues on through electronic music compositions by Varèse, Xenakis, Cage, Berio, Ligeti and Maderna – some of which represented their composers’ sole ventures into the medium of electronic music. Many of these pieces are rare recordings not easily found on disc, although some were recently made available again on the earlier Él Records set Adventures In Sound (already reviewed on this site). They make for fascinating – sometimes beautiful, sometimes sterile, sometimes terrifying, and often alien – listening, and they illustrate so much in terms of where pop music’s progressive experimenters were to find (or had found) new ideas, starting with Joe Meek, then – through George Martin – the Beatles (Tomorrow Never Knows through to the notorious collage Revolution 9), and (over the pond) Frank Zappa, the Grateful Dead and United States Of America. And onward…moog synth, Soft Machine, Kraftwerk, New Order, OMD, ever onward into today – the list becomes endless. It’s not altogether fanciful to simplify and say it’s “all because Joe Meek heard a new world”. Just take an educated listen and you’ll hear what I mean.