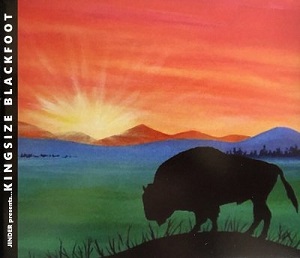 
Emerging out of the pastoral West Country with his tenth album is Jinder which explores a variety of American roots music, Appalachian Bluegrass, country-blues and more.

A varied but cohesive album ensues with opener 'Great Plains' which comes in under one and a half minutes with an instrumental riff laden song with a very Southern feel on Electric Guitar, drenched in distortion to which you can imagine the heat and the dust synonymous with the southern States. Ending the song with a chant which evokes images of Native American heritage, Jinder explores more than just the contemporary side of American roots music.

What makes this album quite daring is attempting songs which have become 'standards'. Lead Belly's classic 'In the Pines' which is originally a traditional number comes in third track on the album, making a bold statement which forces an element of authority on the listener to take note. This for me, is one of the standout tracks on the album.

Other classics like 'Brother Can You Spare A Dime', 'Cocaine Lil and Morphine Sue' and 'Automobile Blues' by Lightnin' Hopkins are found on the album. All these songs are sung with real grit and real passion. It's evident that Jinder knows which songs to carefully pick to suit his voice and style.

But for me this is what lets the album down as it is essentially another covers album of classic traditional numbers or songs by very established artists, with reluctance to explore further the plethora of music from the underbelly of States, rather relying on tried and tested material.

There are two original songs on here which are the opening and closing tracks which work well but fail to rouse much attention because of numerous classics on here. What promises a lot becomes an unadventurous covers album.

If you would like to dip your toe into the water of American roots in its broadest sense, this is an album for you. Well arranged and well crafted versions of songs that came to prominence in the 20th century from an artist who isn't afraid to tackle such songs of importance.