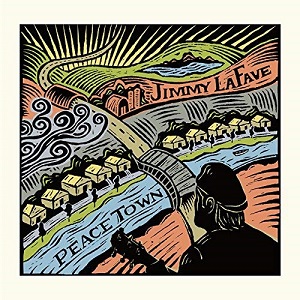 
On 18th May, 2017, Texas legend Jimmy LaFave made an emotional final public appearance at a sold-out tribute show in Austin, just two days before he died at 61 years of age, from myxofibrosarcoma, a rare, and aggressive form of cancer.

Having been diagnosed with this illness in June 2016, the Austin-based singer and songwriter resolved to continue to both perform and record as long as he as able. Peace Town is the posthumous double CD release that consists of 20 tracks that he was able to record before he died, from a list of over 100 songs that he had hoped to complete. And what a beautiful parting gift this collection is, with not a single bad song in the collection.

For those unaware of his musical pedigree, amongst a plethora of other credits LaFave was a founding-father of the Oklahoma Red Dirt music movement, multiple-award winning songwriter, winning the Austin Music Singer-Songwriter Of the Year Award in consecutive years, a consummate live performer, a master of interpreting songs of others and a producer of high renown.

Album opener, an emotional version of Pete Townsend's Let My Love Open the Door, is followed by one only three self-penned songs on the release, Minstrel Boy Howling at the Moon, a song which perfectly captures the vagaries of life encountered by a musician on the road.

LaFave's close affinity with Oklahoma is apparent throughout the two discs. Foremost amongst the artists he admired being the iconic Woody Guthrie. Thus it should come as no surprise that the album's title Peace Town comes from the man, and that the collection includes three songs Jimmy composed to Guthrie lyrics, the title track itself, Sideline Woman and Salvation Train.

This endearment to the aforementioned state, and its musicians, is further exemplified by ther inclusion of his versions of Leon Russell's Help Me Through the Day, My Oklahoma Home (It Blowed Away) by Bill and Sis Cunningham, together with an exquisite rendition of J.J. Cale's Don't Go To Strangers which shows his mastery of interpreting slow jazz and blues

He can rock too, as his energetic, dynamic version of Chuck Berry's The Promised Land, together with a blistering take on Bob McDill's I May Be Used (But I Ain't Used Up) attest. Contrast this with his great ability to affect the emotions at the other end of the scale. Disc Two opens with a heart-wrenching take on The Band's It Makes No Difference. Here, Robbie Robertson's song is shorn of the original saxes and delivered with a voice that would melt the heart of a granite statue. Similarly, David Ball's When The Thought Of You Catches Up With Me drips with emotion and surely echoes as much as any other song on the album the background circumstances under which these recordings were made.

LaFave is also recognised as one of the outstanding interpreters of Bob Dylan music, and three of the latter's songs are to be found here, What Good Am I, a sparse You're Gonna Make Me Lonesome When You Go and a fragile interpretation of My Back Pages, simply presented with voice over plaintive piano, all of which testify to the validity of the aforementioned claim.

The album finishes a Tim Easton cover called Goodbye Amsterdam, a nod to his symbiotic relationship with the city, and also a poignant track on which to end an album that will be etched upon the memories of all who have the good fortune to hear it.

In many ways this release is one of paradoxes, whilst it can be seen as reflecting heartbreak and melancholy, it is at the same time uplifting and celebratory; whilst it is a farewell for adherents it can also be viewed as an ideal introduction to non-initiates.

What is clear, however, is that the musical legacy that Jimmy LaFave leaves will endure.