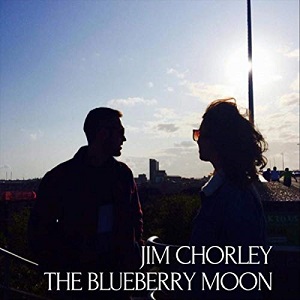 
Chance meeting at festival leads to man being featured on BBC news. It's not often you can read a sentence like that and not leap to a certain conclusion, but this is exactly what happened to singer songwriter Jim Chorley in the summer. Having recommended to a BBC South Today film crew that they check out the acoustic headliner as he was really good (a certain Jim Chorley), he was then contacted by the same crew to film a segment for the news.

So it was that Jim found himself in a crop circle near Devizes talking about his dad. Dave Chorley, along with his friend Doug Bower, was responsible for inventing and creating the crop circles that were so often in the news in the late 70s and early 80s. Jim also got to perform his song, Painting Circles In The Corn, written to keep the memory of these two extraordinary men alive. Remarkably, it was the first time Jim had stepped foot inside a crop circle.

However the latest single released is Blueberry Moon, following up from June's release of There's Nothing Like Your Love. All the trademarks of a Jim Chorley release are present and correct; the warmth, the intimacy, the soul. Inspired by the Southampton waterfront, it's also a song full of romance and atmosphere, helped in no small way by Jamie Wilson on Cello. It's an achingly beautiful track, and yet another sign that Jim Chorley's star is on the ascendency.