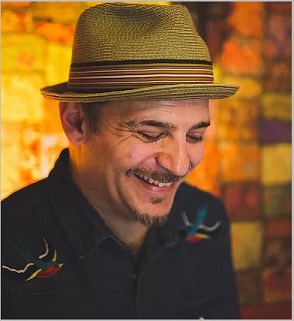 
Jim Chorley has been around the music scene for quite some time, popping up in venues and festivals and often stealing the show. Up until now he's always been somewhat below the radar, and those of us who have "discovered" him feel like we have this magical secret that nobody else knows about. It seems it is time to share him with the rest of the world however, as There's Nothing Like Your Love is just the start.

The new single is quintessential Jim Chorley, filled as it is with both heart and soul. Jim pours himself into his music with a passion that bleeds into every note. Each song is genuine, as if every single one has been lived, and not for nothing was his previous release called Honest and True. There's Nothing Like Your Love has a couple of other talented musicians performing too; Neil Valentine's viola playing adds even more emotion to the mix, and Rob Parsons (who is both a great folk player and a beautiful boat builder) plays the mandolin.

Recorded at Hightown Studios in Southampton, produced by Matt Salvage, and mastered at the legendary Abbey Road, the new single is a small leap forward for Jim Chorley. To put that in context, the leap is all about the production values, as opposed to the quality of his song (which never dips below excellent). There's Nothing Like Your Love is an exciting statement of intent, and on this form, the promise of further new releases to come is thrilling and tantalising.

If you are outside that growing circle of Jim Chorley fans, give this a listen and prepare to join us.