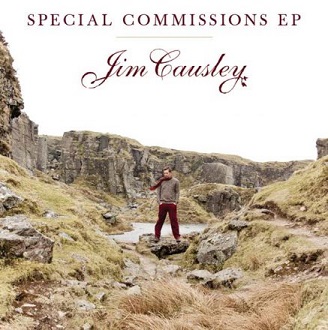 
For those of you who don't know Jim Causley- I suspect you are few and getting fewer by the season, here's a little background to set the scene for this EP. Multi award winning Jim - 'Spiral Earth Singer of the Year' award winner 2014, 6 time BBC Radio 2 Folk Award nominee including 'Singer of the year ' in 2017, seems to eat live and breathe all things folk. He has presented his own BBC Radio Devon folk show and been engaged in various commissions and collaborations for TV and beyond. Described by Mojo as 'the finest singer of his generation', and by the Westcountry's father of folk Geoff Lakeman as possessing a 'voice in a million', there's a sense that we are amongst folk royalty in the presence of Jim. Seeing that he keeps company touring and recording alongside the likes of Waterson: Carthy /Shirley Collins/Kate Rusby amongst many more gives more than a little credence to this.

A trip to his website, marvellously branded with old school, vintage charm, secures his presence as not 'just' a singer, but a rounded entertainer and investor in imbibing folk culture into that of a contemporary vein, with timeless, classic skill. There's the gloriously kitsch video of Causley's version of 'I Am What I Am' seeing a transformation from rural uncluttered good honest tradition to a dance hall, Saturday night good old entertainer. There's a sense of uncompromising pride, in familial heritage (Jim is relative to celebrated Cornish Poet Charles Causley) and to that of his Devon roots which forms a bedrock to this album.

This work is very much what it says on the tin in many ways- a collection of specially commissioned projects that has been consolidated into an EP. However, what could be incohesive, due to the varied nature of the commissions, happens not to be at all. The songs all weave a similar thread of being about place, environment and connection to it in one way or another. That, alongside Causley's distinctive rich narrative style ensures that the EP holds very well together as a body in itself- another testimony to Causley's discernible talent.

'City of Trees' is a strong opening, a song in celebration of the trees of Exeter, a work full of colloquialisms and rich with locality, pride and regal celebration.

The second track is Causley's a beautifully crafted arrangement of Tony Deans ballad 'Diamond of the Moor', a tale written about the true life tragic murder of Charlotte Dymond who lived on Bodmin Moor, and of the doubt surrounding the hanging of her alleged and convicted murderer in 1844.

'Green Lanes' is a commission by local Devon author Valerie Belsey, who is the country's leading expert on the subject. She wanted a song to help educate attendees of her talks and the wider world on this lesser known facet of our countries history. Causley, arguably being amongst the leading torchbearer voices- certainly in the south west- for keeping the heritage of the spoken and sung word burning, does this beautifully with a song that naturally and deftly conveys due respect for the diverse history held within our lanes.

One of the highlights of the album for me is 'Pride of the Moor' a song written for a project devised by artist Simon Pope in conjunction with SpaceX Gallery in Exeter about another of Devon's uncelebrated heritage riches, Tin Mining. The orchestration from the opening bar supports a rousing chorus singing the praises of our beautiful moorland treasure. Okay so maybe I should 'fess up' at this stage as north born settler on the edge of the south moors, some 20 years past now and as such perhaps it's not possible for me to be unbiased with regards to the feeling the song emotes. But that it sparks a little pride in me to my surroundings means I think as a song it's done its job well.

Another highlight, 'Glorious Devon Morning', is equally anthemic although more spacious in its arrangement. A song that opens and ends with birdsong, it is a beautifully simple and effective way to emphasise the sense of genuine tenderness about the subject. The song was written by Scots born Martin Rooney and was heard by Causley at a Sidmouth pub session. Finding out that it was un-recorded, Causley asked permission to do so as quite rightly he wanted it to be heard and shared by the wider world. It's a beautiful song and well worthy of this recognition I feel.

It's elements such as this gathering of uncelebrated or unknown songs, stories, tales and places that really endears me to this work and to Causley's motivation within it. He feels to be at both times humble and unapologetic, with an earnest authenticity that's produced something robust and generous. It's a great introduction to his work and ethos if you don't know it already, or addition if you do.

Pride Of The Moor