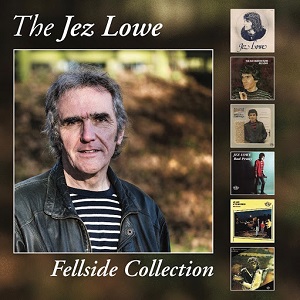 
On the, admittedly faint, off-chance that you have never heard of Jez Lowe, the probability, nevertheless, is that you have certainly heard his songs, highly valued and recorded by the likes of The Clancys, The Dubliners, Fairport Convention, The Unthanks and The Young Uns, to name but a few. With a reputation as one of the hardest working performers in the country, this long established singer songwriter has not only garnered BBC Folk Award nominations and won a prestigious Sony Radio Award for his Radio Ballads work, but has also received accolades for his work with his own band The Bad Pennies, his Men At Words tour of North America with James Keelaghan and Archie Fisher, as part of The Pitmen Poets and his ongoing partnership with fellow singer songwriter Steve Tilston. Add to this list the fact that Jez is also a successfully published author and musical director for a theatre and you get some measure of his diverse talents.

With The Jez Lowe Fellside Collection what we get, on five discs, is all six albums that Jez released on Fellside Records between 1980 and 1993, most of which have been unavailable for 20 years, plus bonus tracks and rarities from other Fellside projects in which he has been involved. In fact it is everything that he ever recorded for the label, all remastered, with original artwork and an extensive booklet of notes written by producer Paul Adams.

In 1980, a mere four years after the launch of Fellside, Jez Lowe approached the company, originally as part of a duo. Fellside were impressed enough to take a gamble, and even when the duo split up a few days before the scheduled recording, their faith in Jez meant that a new recording date was pencilled in. Recorded in Paul's front room, the eponymous debut album, Jez Lowe, was made in May of that year. On this latest release, the two sides of this first vinyl L.P. have been split across two CDs in order to keep the package down to five CDs, which appears inconvenient. On reflection, however, in practical terms this is not too much different to having to get up and turn over the L.P.

Whilst Jez Lowe, the album, was extremely well-received, for example Dave Arthur in English Dance & Song stating "To my mind the most impressive debut album for a long time", the release was not a true indicator of things to come. Containing only one Lowe-composed song, the rest are traditional or compositions by others. That is not to say that there are not some gems to be found here, and certainly his roots and passion for all things North Eastern are apparent. Opening track Sedgefield Fair/Roxborough Castle gives fellow musicians Sylvia & Jim Barnes ample chance to shine, as does Fill The Tankard/Kildale Jig. The delivery of Jez's distinctive vocals, a trademark to this day, are so apparent even in these early days, thanks in no small part to the excellent recording and production, no mean feat at the time given the equipment and environment.

Less than three years later, in March 1983, Jez was back to record his second album, The Old Durham Road, here presented in its entirety on disc 1. The transformation between the debut and this release is marked. The majority of the songs are self-composed, and even two of the four traditional offerings were rewritten or adapted by Jez. By this time he had added the cittern to the instruments that he played on this album, alongside guitar, dulcimer and harmonica. Greater tonal variety was provided by the use a wider variety of instrumentation, with hurdy gurdy, from Jake Walton, John Bowden providing melodeon & concertina, Stewart Watkins on bass and banjo from Gerry Hallom. Notice of the arrival of Jez Lowe as a singer-songwriter is the most marked feature of this album, however, with high quality compositions such as Hard Life, the eerily spectral Cursed Be The Caller and the title track itself all signalling a singular talent.

August 1985, and Jez had returned to record album number three, Galloways. With Jake Walton and Gary Hallom returning as session musicians, and Anne-Marie Flanagan providing additional vocals, this album can be seen as cementing and reinforcing what had been created by the previous release. This time the collection was entirely composed by Lowe himself, and contains many favourites which have recently been performed, such as Back In Durham Gaol, dedicated to Tyneside poet Tommy Armstrong, and Old Bones, which, in Lowe's own words, is "an answer to those who consider a soldier's life is a suitable alternative for the unemployed youth"

Bad Penny, released in 1988, was Lowe's last solo album for Fellside, and saw a shift, as this is a cycle of songs around a theme. In several respects, less 'folky' and with more elaborate arrangements from an even greater number of additional musicians, including clarinet, it remains an intriguing, but easy and enjoyable, listen, with Another Man's Wife, London Danny and A New Town Incident nestled amongst moving songs such as Yankee Boots. Of great interest, however, are the three bonus tracks. From a 1985 project involving Jez, Martin Carthy Roy Harris, Linda Adams and John Bowden, entitled A Selection Of Songs From The Penguin Book Of English Folk Songs, Lowe's two solo tracks, When I Was Young and The Grey Cock appear here, alongside a superb version of The Golden Vanity.

Disc 4's bonus tracks are also notable. Royalties from Fellside's 50th release, Flash Company (1986), were donated to Nic Jones, following his road accident. On this Jez contributed a reggae version of Bob Dylan's Licence to Kill, from the latter's Infidels album. Reprised here along with a previously unreleased live track, The Bergen and a medley of two unaccompanied traditional north-eastern songs, Felton Lonnen/Here's The Tender Coming, (from a 1992 CD, Voices), Briefly On The Street is the first Jez Lowe & The Bad Pennies release, from 1990. Featuring Bev Sanders, Rob Kay and special guest Chris Leslie, this album contains many fine tracks, with evocations of individuals, characters, situations and dockyard cranes that painted vivid pictures when written, and which still resonate today.

The final disc in the collection presents Bede Weeps, the final album Jez made for Fellside. Released in 1993, it reflects a maturity born of experience; broader themes, a more expansive contrast of light and shade, not only enjoyable and, at times, informative, but also observations which are passionate and caring in equal measure. These Coal Town Days, Too Up, Too Down and Last Of The Widows conjure atmospheres and feelings in a way that only master-wordsmiths can. Of the bonus tracks on this disc, Bowness Bells, recorded live by Fellside in 2010, featuring Kate Bramley, Boo Hewerdine, Rory McCeod, Ruth Notman and Julie Matthews, is from the Along The Wall Project and brings things to a fitting end.

In his sleeve notes, Paul Adams says of Jez's music "Songs rooted in his Native North East England, a not always nostalgic look at times gone by; songs with universal themes; a humorous song, and a lament for the current situation." With the best of artists, in whatever discipline, high quality creativity has the ability to transcend geographical locality, and this is true of Jez Lowe.

The release of The Fellside Collection clearly shows Jez Lowe's development as one of our leading songwriters and performers, and it should be seen as an essential purchase. With his web-site store offering this set for only £15, there is surely no excuse.