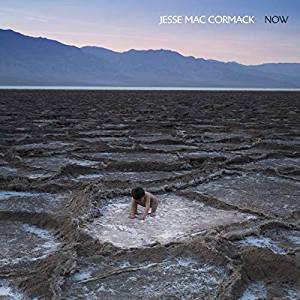 
After three EP's, 2014's 'Music For The Soul', 2015's 'Crush' and 2016's 'After The Glow', the Canadian singer-songwriter Jesse Mac Cormack releases the ten track album 'Now'. Whereas Jesse's well received earlier work drew from folk, roots and rock, we are told the songs on 'Now' are "Prismatic and forward facing, recalling the adventurous pop of Tame Impala, Talk Talk and Perfume Genius."

All ten songs are Jesse Mac Cormack originals who also engineered and produced the album which features a stellar cast of musicians playing numerous instruments, but unfortunately far too numerous to mention by name.

Opening track 'Give A Chance' enters on a burbling keyboard, synth type motif over which Jesse's restrained, husky vocal atmospherically half sings and half speaks the lyrics. The track gradually builds with clattering percussion, supporting vocals and all sorts of ambient effects before it drops out for the starkly percussive outro. Along with the influences quoted above, this opener also rather pleasingly put me in mind of Orchestral Manoeuvres in the Dark.

'No Love Go' uses a similar soundscape but is a much more uptempo number with an edgy, pushy vocal, while 'Stay' is all riffy and guitar driven with a lovely chugging rhythm that opens up sweetly into something of a traditional rock chorus and epic solo. Great track this as is the dark, doomy tones of follower 'Now' which conjured up images of prime era Patti Smith and then 'Ever Go On' very nearly enters Euro disco territory and it would be easy to imagine this one becoming an underground dance classic.

And so it goes through the rest of the album with a dizzying amount of influences and reference points on display, all harnessed to a seemingly endless creative output.

On such a diverse album as this any favourites are going to be personal rather than universal and other stand outs for me were the lovely piano led ballad 'Sunday', the Tom Waits percussive stylings and eerie vocals of 'Hurricane' and stark acoustic strum and slow drama of album closer 'Nothing Lasts'.

It's very hard to place this album in any sort of musical context beyond keep referencing existing artists, genres and movements, so I will immediately make that mistake again and say for me the overall sound, feel and textures here are most akin to those of the marvellously contemporary US singer songwriter LP. However, at no point does anything on this record feel contrived or derivative and it really is a great example of the old adage, 'The whole being greater than the sum of the parts'. Perhaps the promotional material that accompanied the review CD has it spot on when it simply states "Jesse Mac Cormack's new album 'Now' is a work of ardent, kaleidoscopic art-rock".