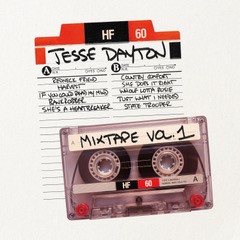 
When Jesse Dayton plays live there is a helluva lot of fun to go with the guitar shredding, the bravado and deliberate big poses.

And he brings that irrepressible energy to these tracks, some full-blooded with others more muted but they would all fit seamlessly into any of the 150 gigs he plays a year.

The exuberant ten songs here benefit from his customary, front-stage verve and bite, giving them an edge and flavour his fans, The Hardchargers, will jump heartily to cheer.

Austin-based Dayton, who has played lead guitar on recordings, and live, with country legends Waylon Jennings, Ray Price, Johnny Bush, Willie Nelson and Glen Campbell to name but a few, is hooked on country music but thrives on the punk sounds that ripped through his youth as well.

Dayton says he wanted to lay down "cool versions of the songs" he thought "the original writers would dig." Wilco Johnson has approved the album's interpretation of Dr Feelgood's, She Does It Right, so it looks as if Dayton's hopes are on the road to fulfillment.

Dayton is no stranger to the covers' album idea - South Austin Sessions came out 13 years ago - so he's sure-footed and thoughtful in his approach.

The frenzied AC/DC offering, Whole Lotta Rosie, loses none of its punch when pulled down to a bluesy level with a live sound to it. By contrast, ZZ Top's, She's A Heartbreaker, sounds more fully fleshed out than the original with chunking bass and drum pounds driving it all along grand style.

Warming and open-hearted is his approach to the Gordon Lightfoot classic, If You Could Read My Mind, and then he goes for a honky tonk take on a rattlingly storming, Bankrobber by The Clash, where Dayton's love of this band shines through.

This is a mighty fine, solid and pleasure of an album well worth exploring. Is Volume 2 a possibility? We will have to wait and see.

Dayton's sleeve notes on each track are interesting and enlightening, and well worth reading, too, just like this review, I hope.