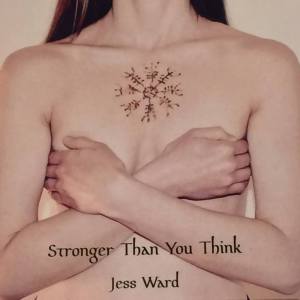 
An extraordinary and distinctive talent, this Jess. And this album (which – curiously – bears a 2017 date even tho’ it was only released this year) is an impeccably produced artefact containing some absolutely magical music.

Jess is a Pembrokeshire, West Wales-based singer, songwriter, harpist and fiddle player, mostly performing solo or with fiddle player Holly Robinson (although she’s also a member, with Holly, of five-piece Welsh outfit Estron). I learn from her website that after many years of performing and creating music with guitar she has latterly found her dream instrument in the Celtic lever harp. And what wonderful sounds she conjures from its strings; not by means of winsome, gentle flutterings and cautious arabesques, but instead displaying a technique born of a forward-driving rhythmic propulsion while all the time retaining a strong sense of melody. Indeed, I don’t think it overly fanciful to hear in her playing the Pembrokeshire landscape, with its “crashing waves, rugged cliffs, mirrored pools and twisting oaks”…

Stronger Than You Think, Jess’s second album release, is a compelling self-portrait in purely artistic and musical terms, but one suspects in a more literal (autobiographical?) sense too, in that its intense account of the ending of a relationship rings so very true. All 12 songs making up the album’s sequence are self-penned originals, although two of them use an existing traditional melody. The first of these, Fallen, which takes on the tune of I Wish, I Wish, might be thought a brave choice of lead-track for a harp player, since it finds Jess accompanying herself on the fiddle, but it’s an arresting opening gambit for sure as it tells of a lady’s suicide following rejection by her lover (this incomparably beautiful and austere song proves an early disc standout, in fact). Thereafter Jess confines herself exclusively to the harp for accompaniment, but it’s a tribute to the mesmerising power of her playing and singing (as well as the hauntingly harrowing, often desolate quality of her songs) over the whole 58-minute span of the disc that I never got even remotely bored with this aspect, for Jess has a great feel for contrast in mood and texture that ensures a constant interest for the listener all the while the focus is on her central narrative. Although for Jess’ songs their intimacy of expression is paramount, there’s also an enviable (and perhaps rather unexpected) feel of spaciousness in the arrangements that eschews any sense of cloying exclusiveness and draws the listener into her emotional predicament, thereby invoking a tremendous rapport and sympathy. Fittingly, the only other primary musical accompaniment for Jess and her harp comes from double bass player Andrew “Wal” Coughlan, with occasional percussion duties on a small handful of songs being shared between Jess and Andrew.

Jess’s singing voice is characterised by a flexibility that unites its charming delicacy with an unyielding strength of purpose, ranging from the sweetness of Oh Love to the vacillation of Before The Dawn and the dissonant crooning and probing questioning of Unfasted, even occasionally breaking into a painful growl (as with the strident “hot damp rhythm” of Universe Of Stars). Jess multitracks her own voice on several tracks, notably the sublime closing two-part a cappella entreaty Lay My Body Down, but also supplying gorgeous harmonies on Silence Is Not Golden and further supportive entries and shadings on Cathedrals On Wheels and the disc’s central odyssey Stranger In My Place.

In Stronger Than You Think, Jess has produced an entirely convincing, forcefully resilient portrayal of an extremely painful personal experience, which is also an intensely rewarding aural adventure for the listener that bears repeated exposure. This CD will, I rather suspect, be winging its way to my albums-of-the-year list.