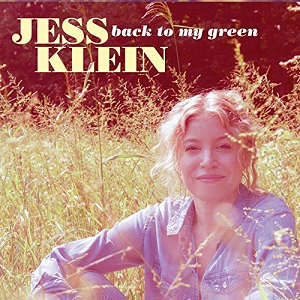 
Her eighth studio album and, following a five year gap in which she had to recover from rsi to the wrist, the first since getting wed and moving from Austin to the rural calm of North Carolina, this finds Klein in an upbeat mood, but one tempered by the realities of life in contemporary America.

Written in collaboration with Jonathan Byrd, who also sings on two tracks, 'In Dreams' is chugging country number about finding the confidence and courage to try and overcome mental health issues (here it seems to be anxiety or agoraphobia) as she sings "I don't know why nobody told me/We hold the cure for pain/I know I'd fly if my dreamin' could only/Brave the light of day"), trusting in the support of others.

That theme of resilience also underpins the spare strum and march beat that guides 'Tougher Than I Seem', gradually encompassing Mike Grigoni's pedal steel on an inspirational, gospel-tinged anthem to overcoming the odds and setbacks ("every time my dream has been denied/I've earned my pride"), and is also the foundation of 'Mammal', its funkier keyboards and guitars 60s Motown groove augmented by background gospel whoops as it swells on defiant wings ("I'm starting to realize/Put down and paralyzed ain't the place for me") to its rousing closing refrain "I'm better at breathing."

The nature imagery here spills into 'Blair Mountain', a blues-tinged folk protest that, evocative of Buffy Sainte-Marie, takes her back to her activist roots, the title a specific reference to the West Virginia coal mine that, in 1921, was the site of the biggest labour uprising in America since the Civil War when union miners and coal company supporters clashed over safety issues. More generally, the song also serves as a condemnation of the corporate destruction of nature in the name of profit. The same holds true of 'New Thanksgving Feast', a Baez-like simple acoustic number that, while inspired by the Native American protests about the North Dakota pipelines, is a wide-ranging tribute to all those who, indigenous or immigrant, - Russian, English-Irish, African, Chinese, Italian - seek to defend their heritage and fight for their rights or, on a football field, refuse to rise and "salute a country that would let his people die."

Sandwiched in-between comes the back to nature title track, an airy keyboard and guitar number clearly informed by her relocation to a place where the sound of the only things revving up are the tree frogs. It stands in contrast to the urban nightmare of living in a "crazy circus town" inches from the 'Gates of Hell', its acoustic blues conjuring early Dylan while female backing vocals provide the gospel response.

The first to feature Byrd's harmonies and again set to a minimal acoustic guitar strum, '4 the Girlz' is a tribute of a different nature, to the young women (and, being an equal opportunities lyric, the boys too) who have the confidence to know who they are, what they want and how to get it while she's "always scared to look up from the ground." It's theme of finding self-confidence and self-belief is echoed in the slow but deliberate walking march rhythm of the strings-caressed 'Kid', Byrd again on harmonies, as the narrator passes on hard-earned advice about using the pain, of getting back up when you fall and not to "let the shame come and hide you way" and that, while the road may grow steeper as you grow older to "give yourself time to gather your breath/Then watch he summit appear", the number building to a climax as the goal of the journey is understood to be love.

Which, appropriately, sees the album end with the strummed, steel-flecked hymnal croon of 'I Hear Love', a prayer or benediction for those who've come so far, those full of hate, the child raised in anger, to rise above the dark night and find salvation "in times like these."

She says that, a response to the dark shadows of the Trump administration, she was determined to write songs about being strong and of finding hope and healing, to remind that positivity is still a powerful choice. Owning this album is a yes vote.