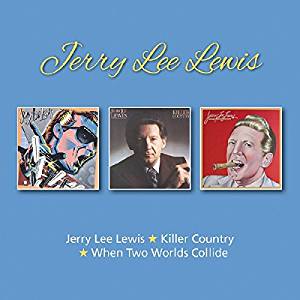 
There can be very few people in the world today that have not heard the name Jerry Lee Lewis, one of the true giants and icons of Rock and Roll music.

Jerry is now in his 84th year and is still touring. This, combined with his over 60 albums, his first one being recorded in 1958, will ensure that his name will live on well after he has departed this mortal coil. At his advanced age it is unlikely that he still plays the piano with his feet although this was a regular part of his performances in the 60’s.

Jerry’s style of play revolves around a hard driving piano combined with his voice which suits rock and blues in equal measures. For people wishing to have a bit of foot tapping exercise, this music cannot be surpassed.

This latest compilation of Jerry’s music is a combination of three albums. “Jerry Lee Lewis” (1979) “When Two Worlds Collide” (1980) and “Killer Country” (1980.) They give a great insight into what makes this man such a popular and lasting figure in music. His rocking piano is the one constant throughout his music.

Nearly all the songs on these three albums will get you up and dancing, or thinking about it in my case, although there are a few slowed down surprises, not least of these being “Over The Rainbow.” There is also a great version of Johnny Cash’s “Folsom Prison Blues” of which I am sure the man in black would approve.

Jerry is a performer, not a songwriter, and he relies mainly on others to provide him with the music to belt out. Equally at home with Rock or the Blues, he is a dynamic artist whose music may seem dated by modern standards, but will no doubt live on much longer than much of today’s dross.

This compilation may not appeal to those of the younger generation but it serves as a great musical history lesson and tribute to a supremely gifted and driven musician.

His personal story will make a great film one day and I hope that Hollywood is not too long in making it.