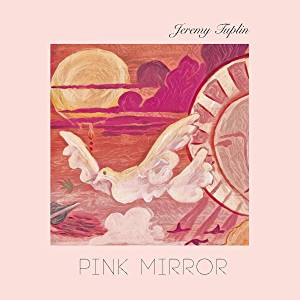 
Hailing from Somerset but now based in London, Jeremy Tuplin is one of those difficult to pigeon hole artists that mean descriptions of him and his music are peppered with phrases such as 'fiercely independent', 'unique', 'idiosyncratic', 'unconventional', and the like.

After EP releases in 2014 and 2016, his debut album ' I Dreamt I Was An Astronaut' came out in 2017 to positive reviews, hailing its 'retro-futuristic feel' and the enthusiastic response even led to the suggestion of a new genre, 'Space Folk'.

Follow up record 'Pink Mirror' features twelve Jeremy Tuplin originals which he co-produced with Mark Estall, who also carried out recording and engineering duties. Along with Jeremy, numerous performers are credited by name, but unfortunately not in terms of what they played on the album so the actual instrumentation remains a bit of a mystery.

Opener 'Can We Be Strangers' enters on gentle guitar strum and a half sung, half spoken vocal from Jeremy which sits rather pleasingly somewhere between a more tuneful Leonard Cohen and a less strident Nick Cave, with a dash of Lou Reed round the edges. At times across the album as a whole Jeremy can sound a bit 'one paced', but this is a minor quibble as the music brings a lot of variation in itself, as is the case here where the track is cleverly decorated and builds towards the climax on a synth laden soundscape.

'Bad Lovers' is a sharp, jangly guitar driven, hook ridden song, 'Just Cos Ur Handsome' wry and tuneful in a 'Jarvis Cocker' type way, whilst 'Gaia' is similarly melodic but underpinned with starker, scratchy guitar pushing things through, and it also boasts some rather fine harmony vocals.

'Pandora's Box' starts with deceptive waltz time acoustic and gentle vocal until Pandora definitely leaps out the box at around two minutes twenty seconds in as the song lurches into a fuzz, reverbed synth drenched passage up until it all settles down again just ahead of the songs final denouement, "they say it's hope that kills ya".

The rest of the album follows suit, quirky, restless and consistently engaging. Of the remainder, stand out tracks for me are the tight, bumping rhythm of 'The Machine', the minimalism of 'Frankenstein', 'Humans' repeating the trick of seducing the listeners ears with another gentle opener that portends a fuzzed up, psychedelic work out, and album closer 'The Beast' is simply glorious, a fine, wistful vocal over picked electric guitar that brings proceedings to a very satisfying close.

'Pink Mirror' is another success for Jeremy Tuplin, great fun all round and long may he defy categorisation.