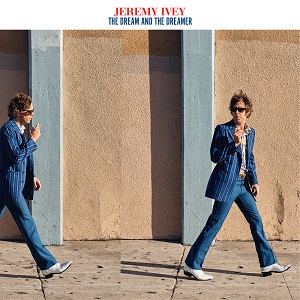 
Recorded in a Nashville and produced his wife, Margo Price, Ivey turns a folk-rock musical eye on the current condition of the American dream and its dreamers, most specifically so in the album's Neil Young-influenced opening track, 'Turning Diamonds Back To Coal'. Written during the week of the Vegas shootings and the alt-right march, with the "torches of the hate parade" played out over a rumbling rhythm and resonant electric guitar riff, it's basically about how, looking to "Make America Great Again", it might better going backwards instead of forward, referencing how America is built on stolen land.

That idea of regression is there too on the Kinks-like mid-tempo tinkling pop of 'Falling Man', a dream of returning to a time when there was "no god or souls to save" before "we started living in the great unknown…just a dollar in a paper town".

It's back to Neil influences with the slow shrug rhythm of Story of a Fish, a song he says relates to his being adopted and how salmon, "born far from home" seek to return to where they belong. More musically upbeat in reflection of the optimistic lyrics ("There might be something real inside this dream"), 'Worry Doll' rolls in the honky tonk piano for a more country sounding track before things slow back down and get dark again on the 'Laughing Willy', a song which, moving from fingerpickerd acoustic to more brooding electric, is about change for the worse as he sings of "the music of the after world is ringing in my ears" and how Maria and how "we all messed with fire, but she got burned the worse".

The sound is lighter for the fingerpicked shuffle along country of 'Greyhound', Price on harmonies and pedal steel streaking a number in the weary life on the road tradition that hints at Gram Parsons, a scenario and sensibility also heard on the harmonica blowing walking beat 'Ahead, Behind' with its weariness of feeling out of place and time and hearing "people talking all the time, telling lies and plagiarising lines".

The album's two stand out numbers are weighted at the end, first up with the acoustic slow strum of 'Gina the Tramp' with its narrator wandering a city full of broken people, describing himself as "a well-dressed advertisement for a company that closed the door", lost "like smoke from the sewers in the rain" as he recalls the woman who "made dream catchers out of guitar strings" staring from the window with "eyes like a cold bus station" and wonders "how can you miss somebody that you never even knew".

Finally, it ends with the title track, opening piano chords heralding a Young-like reflective ballad that (also nodding to Lennon's 'Imagine') returns to the idea of being lost in transition, between "the stars and burnt out cars," and the gulf between the dreamer and the dream as time runs out and how "sometimes you got to walk away just to get close". It's a despondent snapshot of America, a dying land where there's "fear in the schoolyard, fear in the church, but the fear on the TV might kill us first" and only dead things make it out alive as we sit through all night reruns of our broken dreams and "the dreamer drives his car on the native graves".

It ends with the line "We all hope it works out, we all wish them well". Listening to the album, you can't help but feel the candle of hope is flickering out.

Diamonds Back To Coal