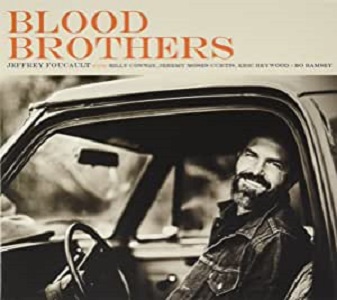 
After around twenty years on the road and in the studio, Jeffrey Foucault is now one of the most established voices in modern Americana, refining a deceptively simple signature sound that brings with it a profound emotional power.

I first came on board with his marvellous 2011 album 'Horse Latitudes' and was immediately captured with the beautiful sparseness of his work, that nevertheless at its heart still produced music that managed to straddle blues, country, R&B and folk.

Several albums and a lot more critical acclaim on, 2020 brings us the ten track 'Blood Brothers'.

Cut live to tape in three days at Pachyderm Studios in rural Minnesota, the album features long term musical collaborator Billy Conway on drums, Bo Ramsey electric guitars, Jeremy Moses Curtis bass and Eric Heywood on pedal steel and acoustic guitars. Although too numerous to mention individually, a feature of this album is the stellar cast of female backing singers that add so much texture to the songs, and this really is something of a production master stroke.

The songs themselves are all Jeffrey Foucault originals, except for two co-writes with the aforementioned Billy Conway.

Opening track 'Dishes' is just a joy, lightly strummed guitar and a voice that sits somewhere between Lyle Lovett and Don Henley paints the picture, "Do the dishes, with the windows open, soak the dirt from under your nails" before the band show up and subtly carry the song through.

'War On The Radio' is a much rockier affair, clattering in on a lovely John Hiatt type vibe, 'Blown' is a stunning exercise in harmony that's early favourite of mine, and title track 'Blood Brothers' sits mid tempo with a strong rhythmic pulse and killer refrain.

And so it goes throughout, each song a perfectly crafted vignette, both lyrically and musically, that epitomizes the old adage 'less is more'.

Other favourites for me are 'Cheap Suit', simple picked guitar and understated vocal so raw that it could have been an out-take from Springsteen's 'Nebraska', the sweet licks of the playful 'I Know You' and the drum led, shuffling clatter of 'Dying Just A Little'.

Recorded with a vibrant immediacy, superbly played throughout and produced with real imagination, 'Blood Brothers' is another songwriting masterclass from Jeffrey Foucault.