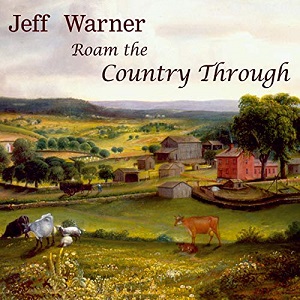 
There can be no argument that Jeff Warner is one of the foremost interpreters and performers of American traditional song. And not only because he comes from one of that nation’s most eminent families of folksong collectors (his parents were Anne and Frank Warner). He’s also one of the most popular performers on the folk scene, and any evening spent in his company is truly an experience to be cherished. Even more surprising, then, that he’s made so few recordings, and Roam The Country Through is only his second album for WildGoose. Here he sings and plays banjo, English concertina, guitar and jig-doll.

Although Jeff’s solo personality is exceedingly charismatic and involving, and he’s a past master at sustaining an audience’s interest over a long timespan by his thoughtful selection of songs and pacing of material, his star can shine even more brightly in the company of another empathic musician. On this latest disc his partnership with young singer/keyboardist/whistle player Alice Jones and ace fiddler Ben Paley proves a singularly inspired move. Having experienced the alchemy of Jeff’s teaming with Alice in the live folk club environment, I can confirm the wisdom of recording them together in the studio for this album. It’s sheer magic.

Whether performing solo or sympathetically accompanied, Jeff ensures maximum concentration on the effective communication of the songs by keeping the arrangements simple, and he’s also careful to make capital out of the various contrasts in timbre that even this simplicity can provide. Having said that, the blend of concertina with harmonium is a particularly pleasing one, which works very well on several of the disc’s choices, and Ben’s fiddle is always a brilliant foil for Jeff, especially when Jeff picks up the banjo.

The tracklist for Jeff’s latest album contains some quite familiar titles, but Jeff’s forte is the research and presentation of interesting or less familiar variants, and there are bound to be many surprises in store for the listener, who is likely to end up preferring Jeff’s versions! On this album, A Frog He Went A-Courting, Roving Peddler, Jordan Is A Hard Road To Travel and Gypsum Davy are cases in point. Other successes in the “familiarity breeds no contempt” department are the Carter Family hit My Dixie Darling, the anthemic yet wistful forebitter Jamestown Homeward Bound (a cousin of Rolling Down To Old Maui) and the Napoleonic ballad Bony on The Isle Of St. Helena; the latter is performed here in spirited a cappella mode.

Jeff and his fellow musicians turn in particularly affecting performances of Beautiful Life (learnt from the Amish community via Ohio fiddler Jeff Goehring) and the gorgeously sanctified Better Home, while at the other end of the secular spectrum we find Jeff clearly relishing the old time cowboy song Hitting The Trail Tonight and the fun Smiley Burnette number It’s My Lazy Day (which I discovered some years ago from the singing of Debby McClatchy). Jeff also admits to only recently being drawn to the standard Tenting Tonight, but it doesn’t show in this faithful performance of a song that he’s known all his life. New York Adirondack Mountain singer John Galusha is the source for two contrasting songs – Days Of 49 and Jamie Judge – and he performs them both with all due gusto.

Throughout the album, Jeff keenly follows the dictum of his source for Train On The Island, Craig Johnson & The Double Decker String Band – “Old-time country music is the source. Delight and bewilderment is the result”. That could well be the motto for the whole of this delectable, eminently enjoyable album.