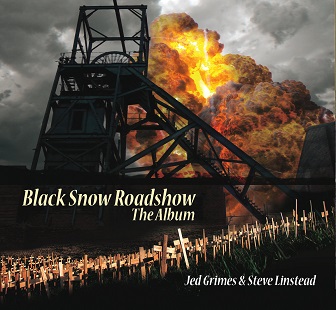 
Black Snow is nominally a celebration of the legacy of the coal mining industry, a portrait of the mining life in song and spoken word. It’s the name given to a 90-minute touring presentation which has as its centrepiece the showing of a multi-award-winning 22-minute film, made by noted director Steve Linstead, that deals very powerfully with Britain’s biggest mining disaster, where, in December 1866, 361 men and boys died in an explosion at the Oaks Colliery near Barnsley. The impetus for the film was Steve’s discovery in 2015 that this disaster had been all but brushed out of the history books, to the extent that very few people (even locally) had even heard of it, and – unbelievably – there was no public memorial to the dead. There was an appeal for funds to provide such a memorial, and herculean public attempts, combined with a Heritage Lottery Fund grant, managed to raise a staggering amount which ensured the creation of the sculpture and also funded the making of Steve’s planned documentary. The film was premièred in May 2017 at the unveiling of the memorial, and has since scooped close on 40 awards internationally.

Steve brought on board acclaimed musician Jed Grimes (ex-Hedgehog Pie and The Hush) in the role of musical director, and together they piloted a multi-media roadshow to take the film to a wider audience in the UK. Basically, the soundtrack to their collaboration is what you hear on this CD. Not, I hasten to point out, recordings from the film’s actual soundtrack (although it does include some of the music and poetry used in the film itself) together with other musical items from the surrounding roadshow sequence which places the film itself – and the disaster it chronicles – in context within the mining life generally.

So what we get on the Black Snow CD is a professionally coordinated sequence of songs, music and spoken word consisting of a handful of traditional mining-related songs (mostly north-eastern in origin); a couple of classics from the pen of crucial Tyneside songwriter John Pandrich (commonly known as Johnny Handle); Jed’s new setting of a broadside from the Kidson collection (Down In A Coal Mine) with lyric adapted by Steve; a snippet of a hymn tune; a rocking contemporary song by Rod Clements; and, as disc finale, the film’s own end-piece, a haunting two-part instrumental composition by Jed himself (Oaks Lament). Both on this final item and on the film’s adopted theme song Guard Your Man Weel, Jed’s own instrumental prowess is augmented by electronica from Rob File. Elsewhere it’s mostly Jed’s fine voice and guitars that you hear, although Steve supplies some vocals too (and he sings The Old Miner unaccompanied). Steve also performs the various poetical works that are sequenced between the musical items. These include some unusual, and cannily inspired, choices: little-known pieces by Wilfred Owen, Philip Larkin and Mike Harding as well as Steve’s own reflection on the Oaks disaster, Salt Of The Earth, which opens the disc. (On a personal note, I was heartened to find several of the selections coinciding with those which I had incorporated into my own mining-themed sequence of song and verse, premièred at Ilkley Literature Festival in 2016; great minds obviously think alike!)

The Black Snow CD is expertly engineered, and the accompanying package is produced to the highest professional standard, with wonderfully informative full-colour 12-page booklet that gives much valuable background to the disc’s content and to the disaster itself. Much of the content will doubtless be an eye-opener to those who know little about this country’s mining heritage, and it’s certainly a thought-provoking programme – even if I’d argue it doesn’t go far enough to dig deeper and more holistically portray the different aspects of the mining life and its communities than it’s able to do within the disc’s brief 42-minute timespan.

Finally, if you’re prompted by Black Snow to find out more about the Oaks Colliery Disaster, then I’d strongly recommend you seek out excellent local (South Yorkshire) singer-songwriter Alan Wood, who has recorded (as a charity fund-raiser single) his own extremely poignant song about the event. Alan has also been a key player in the fund-raising activities, appearing in concerts and folk club charity events, even staging his own musical play on the subject.