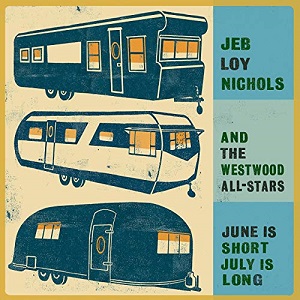 
Writing this review in mid-30 degree Celsius heat, it is clear that June Is Short, July Is Long, the 11th solo release from Jeb Loy Nichols, is the perfect accompaniment to the summer. In a career spanning 25 years, this album will come as a pleasing addition to his almost cult-like fan-base, and would also be an ideal introduction to those yet to be converted.

Wyoming-born, raised on bluegrass and country and western, with southern soul entering his orbit during his teenage years, subsequent short periods of time were spent in Missouri, Texas, New York and London, during which time he absorbed hip-hop, reggae and dancehall, a melange which has influenced his subsequent eclectic work.

The 1980s saw the polymath singer-songwriter, artist and writer, relocate to make his home on a remote smallholding in the Welsh hills, and this rural return to fundamental simplicity has been reflected in his output since, whatever his choice of media. June Is Short July Is Long chronicles this journey. "It's full circle," he says. "I started off in the Ozark hills and now here I am, in the hills again."

The 12 tracks, all written by JLN, except 'In The Night Time' and 'Last Train Home' (JLN, Phillips, Barnes, Davies) & 'Matter of Fact' (JLN & Ian Gomm), in many ways transcend genres, whilst at the same time meeting at a crossroads of soul, folk, country and Americana, encompassing a range of emotions that will surely resonate with any listener prepared to invest in the experience.

Slower-tempo tracks such as of 'Matter of Fact', and the laid back 'Nothing You Can Do About It' and 'Picture Of You', alongside the jazz-tinged 'Remember The Season', and fabulous New Orleans/Dr. John- style 'In The Night Time', make for a perfect backdrop to a balmy summer evening. Together with the solid groove of album opener, 'You Got It Wrong', and the infectious chorus of 'Think I'm Gonna Fall In Love Today' one of the warmest, heart-felt slices of optimistic tenderness you could wish to hear, these songs may represent one side of the emotional mix, whilst other, enticing, tracks offer more of a joie de vivre vibe.

This contrast is provided by the joyfully upbeat, reggae-infused 'Last Train Home' is a treat, as is the quite superb 'Black Rooster', reminiscent of Andy Fairweather-Low during his La Booga Rooga/Spider Jiving era, (it must be something in the Welsh water).

However, the highlight of album might well be 'How Can A Man (Live Without His Mother)', one of the most personal, (but nonetheless empathy-engendering), lachrymal reflections ever. A sublime song that could bring tears to a marble bust if ever there was one.

Throughout this collection, Nichols' gently husky voice is an endearing feature, as is the quality of supporting musicianship. The espoused aim of "Just keep it simple,", with a stripped-down approach, has paid dividends.

June Is Short, July Is Long is a memorable, rewarding and uplifting album, perfect for those sultry nights, and beyond. Long may quality records such as this be released.

Til The Teardrops Stop