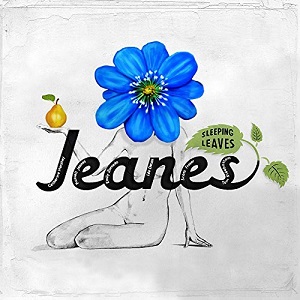 
Dropping his first name for recording purposes, Russell Jeanes, has produced one of the most interesting collaborative EPs that I've heard in a long time. "Sleeping Leaves" has been thirty years in the making.

Based on a series of notes and four track recordings Jeanes went about finding the right voices to do the words and music justice, to make songs that have a pastoral quality and a vocal tone that gives them the perfect setting. You'll note I say voices as he uses three vocalists, Catherine Hershey, Emily Grace Zornado and Lea Decan across the four songs that make up the EP.

Hersey is most used, covering the first two tracks "Simply Jayne (With Morning Blackbirds)", where her voice is complemented by the birds of the title and the follow on song, "Barley, Hops & Yeast", as almost idyllic tribute to the amber nectar. That idyll continues with the next two tracks, "Smiles With Her Eyes" and "Tree Hugs Bees", by Zornado and Decan respectively, though with different dynamics.

The press release compares Jeanes with both Nick Drake and Joanna Newsome, but to my mind a fairer comparison would be with Australian artist Roland Wakelin, as like Wakelin, Jeanes songs set the scene and leave you to fill in the details in such a beautiful way, except that Wakeline uses paint and Jeanes uses music, the strokes equally perfect.