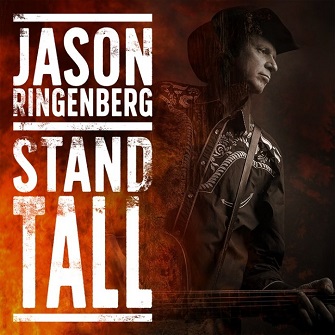 
Although there's been three children's albums in his Farmer Jason guise, this is the first under his own name in 15 years and nine since the last from Jason & The Scorchers, a Nashville band that can lay a solid claim to being the original cowpunks.

Indeed, it was the response to 2010's 'Halcyon Times' that persuaded him that maybe there was still a place for him in today's music world and that his time hadn't passed. The album took shape during June 2017 when he was commissioned as artist in residence at the Sequoia National Park in northern California, his month in a log cabin among the primal wilderness sparking the creative fires. Indeed, featuring fiddle, mandolin and gentle harmonies from Kathy Livingston and Beth Koehler, 'Here In The Sequoias' pays tribute to the sense of being at the heart of nature as he sings "Here in the sequoias you're given every grace, from these giant angels who populate this place."

Not that the serenity overpowered the rock n roll and punk sensibilities that originally brought him to prominence. Opening with the title track spaghetti western instrumental, it then powers into 'Lookin' Back Blues', a rollicking honky tonker that rhymes Luckenbach Texas with solar plexus before sending a jolt of punk energy though Bible class with 'John The Baptist Was A Real Humdinger' that retells the story of Crazy John, the precursor of Christ, in terms of being "an angry wasp with a lethal stinger" who, "standing tall like an old gunslinger", "could work the crowd like a rock star singer".

Prophets of a different nature are paid tribute to in 'God Bless The Ramones', which, adopting a basis Ramonesy riff and urgency, recounts how, in 1982, Jason & the Scorchers were invited to join them on a tour of Texas "guaranteed to make us less obscure", Steve Fishell's lap steel positively smoking and, of course, featuring a ridiculously catchy chorus about how the Ramones "never sold their souls to US corporate radio" and "were the first and they're still the best to truly stand the punk rock test."

There's a clutch of covers, the first of which is Jimmy Rogers' sentimental death song 'Hobo Bill's Last Ride' on which his voice not only echoes Rogers, but also the yodel, Bill Monroe veteran Robert Bowlin adding fiddle to the mix. On a trivia note, the track is specifically placed before Ringenberg's own 'I'm Walking Home', a Civil War-based number with a lively marching beat, Fats Kaplan on tin whistles and fiddle giving it an Irish feel, which mentions Bristol, Virginia, which is where Rogers recorded his early classics.

The second cover is a little more obscure, being 'Almost Enough', a story song with each of the three verses recounting people (a dying town's church congregation, a girl raised in dysfunctional family, a WWII veteran) rising above their circumstances, written by Hugh Deneal of Illinois 'insurgent Americana' outfit The Woodbox Gang. The track was originally intended for a tribute album to Deneal, recorded as a reunion project by Ringenberg's first rock band, Shakespeare's Riot, alongside former drummer Tom Miller and guitarist Gary Gibula (who both feature throughout this album), that never got off the ground.

The two other covers end the album, 'Many Happy Hangovers To You', a 1966 Jean Shepard honky tonk classic about a woman leaving her drunk husband written by Johnny McCrae and featuring gutsy electric guitars from Andrew Staff and Robbie Stokes with Fishell on pedal steel, and, finally, an acoustic, accordion and cello-shaded, waltzing sway through Dylan obscurity 'Farewell Angelina', a song he abandoned after failing to record it successfully during the first sessions for Bringing It All Back Home but which went on to become one of Joan Baez's signature numbers.

The remaining track takes him back to the wilderness for 'John Muir Stood Here', a full pelt punk rocking tribute and thank you to John of the Mountains, a nineteenth century Scottish-American naturalist, author and environmental philosopher who, in the 1890s, was an early an advocate for the preservation of America's wilderness and is often referred to as the Father of the National Parks, Ringenberg singing how "Muir would stand with steady hand for the public trust/And save the old sequoias from becoming old sawdust." This sterling comeback album does the same for Ringenberg.