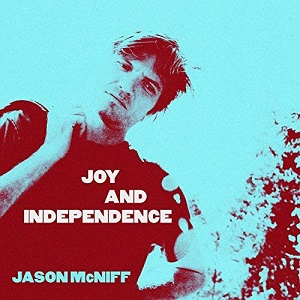 
Jason McNiff is a London based singer-songwriter and 'Joy And Independence' his sixth album release to date. Born in Bradford, 43 year old Jason was around London in the mid nineties to catch the residency of the legendary Bert Jansch at the equally legendary 12 Bar Club and for the next 6 months was an ever present in the crowd, soaking up Bert's techniques, songs and stage craft.

In similar fashion, 'Joy And Independence' was essentially recorded just voice and guitar live in the studio, and Jason tells us "I think in quite a conscious way this new record is intended to be a homage to a golden era of the coffee house Troubadour, a figure that, for me, is summed up in Ramblin' Jack Elliot. 'Sing about something you care about, play a bit of guitar...' is how Jack characterised his vision. And that's pretty much it."

Opening and title track 'Joy And Independence' cascades in on tumbling acoustic guitar and Jason's voice, an engaging hybrid of Bob Dylan's drawl and a huskier Passenger tone, which he uses to good effect in telling a tale that immediately pulls the listener in.

'Wind Of Zaragoza' is a slower, more stately affair that gives plenty of room for both his guitar and voice to really breathe before 'And The Sun Comes Up On My Dreams' barges back in with its percussive back beat, half picked and half strummed rhythm. The whole sound and feel of this track put me in mind of Sweden's Tallest Man on Earth, which is a very good thing in my book.

'Stuck In The Past' is another sweetly played affair which leads us nicely into the albums songwriting centrepiece, the 6 minute 'Amanda', essentially a re-telling of the now infamous Amanda Knox case. The song rolls through deceptively, almost sugar coating the content until the pithy refrain 'Amanda, you were innocent then, you're not so innocent now'. It also boasts a magnificent, but all to short, guitar solo at around 3 minutes 42 seconds, dissonant and tense it embroiders the song perfectly.

'Thoughts' with accompanying singer Lily Ramona, is all country pop harmony and feel good music at its best, then 'Midnight Shift' is a part spoken, part sang history of his own residency at the previously mentioned 12 Bar Club.

'Italy' has an ominous guitar part with its low, deep alternating bass line and although Jason sings in a slightly higher register, the song purveys a real sense of impending doom, and is my personal favourite on the album.

'(There Are No) Ordinary Days' is propelled along by another of those inventive, rolling guitar parts that Jason seems to write in his sleep whilst 'Been A Bad Day' is blues in feel and theme if not structure, with its guitar and mouth organ intro before the archetypal opening couplet 'I'm gonna stop drinking, just not tonight' takes us into familiar narrative territory.

The album gently draws to a close with 'Dream Of A Highway', a reflective number with yet more lovely guitar characterised by Jason's ability to somehow play distinctive lead lines and rhythm simultaneously. Lovely song this and another personal favourite on a fine album.

No matter who the artist is, sometimes a largely solo guitar and vocal album can pall and soon start to sound samey. Luckily this is not the case with 'Joy And Independence' and that's a tribute to Jason's songwriting, voice and delightful guitar playing, all of which are beautifully captured by Sean Read at his Famous Times studio in Hackney.