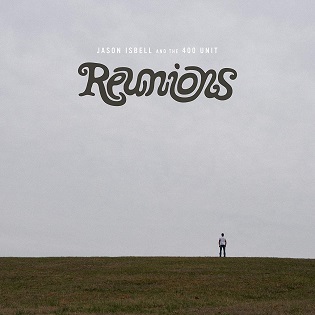 
David Crosby, who sings harmonies on the opening track of Reunions, has compared Jason Isbell's writing to that of Paul Simon, Joni Mitchell, and Bob Dylan. The man has won four Grammy awards and sold hundreds of thousands of records. That said, I must have been living in a bubble as, before I was asked to review this album, I was totally unaware of Jason's work.

Indeed, a casual glance at his oeuvre revealed a past release with the dread word "Nashville" in it - for me, a tag that has become, all too synonymous with a super-competent but ultimately soulless product endlessly recycling the banalities of a country music stuck in an 80s time-loop.

Thus I came, more than a little suspiciously, to Jason Isbell's latest release. You can imagine my surprise when I discovered intelligent, socially and emotionally aware lyrics, and a musicality that, although employing an extremely skilled backline, showcased songs that would still shine even if they were presented in an acoustic environment.

The overall sound is definitely not "Nashville" - if I had to categorise it, I'd say it was somewhere between Dire Straits and Steve Earle's electric manifestations.

There are a couple of songs - the oddly-titled Dreamsicle, and Letting You Go - that explore familiar mainstream country tropes of broken homes, and having your daughter grow up on you, but even those are done in a way that is musically just that bit different. You get the feeling that the arrangements have been carefully tailored to avoid any accusations of coasting through over-familiar waters.

The opening track, What've I Done to Help, features Mr Crosby on backing vocals, and poses a question that Jason obviously wishes more people would ask themselves. The arrangement is spacious, leaving room for the lyrics, which are underpinned by a loping bassline reminiscent of Phil Lesh of the Grateful Dead.

The song is a confessional in which the protagonist details a life of petty selfishness that he realises did no-one much good in the end. The hookline question is repeated over and over in a gospelly fashion that reminded me of Dylan's Gotta Serve Somebody but without that song's religious trappings.

Isbell has said that he's reached a stage where he no longer feels every song has to be autobiographical, he's learning to put himself into other people's shoes. This is most apparent in the track River where he inhabits the soul of a corrupt man who's done everything, including killing, to attain success. The protagonist finds himself at a point in his life where his neighbours and those who work for him regard him with fear, and he just wants the river - a symbol of purity and redemption - to wash him clean.

For me, a high point of the album was Only Children - a song in which the singer is returning from the funeral of a childhood friend, who had shared the same poverty, the same drugs, and the same musical ambitions. The world let one "be an astronaut", the other is now a ghost he talks to in his mind. In other hands, this might be merely maudlin. In Isbell's, it has real emotional resonance.

The other musicians rate more than a mention, particularly the effortlessly soaring guitar of Sadler Vaden, and the sweet fiddle-playing of Jason's wife, Amanda Shires - a recording star in her own right. The Lesh-like loping bass belongs to Jimbo Hart, Derry DeBorja provides sympathetic keyboard support, and Chad Gamble is a solidly inventive drummer. The album was recorded in Nashville, but the crew are from Muscle Shoals, and they definitely bring a different sensibility to the work.

While researching background for this review, I discovered a fair selection of live performances by Jason & Co. on YouTube. In addition to his writing and musical skills, the man communicates with his audience in an extremely entertaining way. If he's ever in your town, and you want a fun musical evening, go see Jason Isbell. You won't regret it.