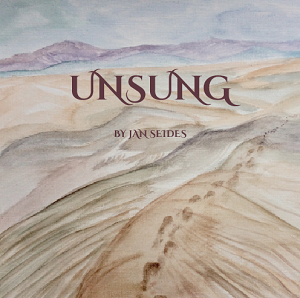 
A concept album of sorts, the Detroit-born, Texas-based Jewish singer-songwriter's latest album is a collection of a dozen songs inspired by and based on often overlooked women in the Bible, played on just acoustic guitars and packaged with a book containing lyrics, illustrations and short commentaries about each song. It opens in the New Testament with 'And So I Followed', the story of Mary Magdalene, putting to rights the misconception that she was a prostitute who washed Christ's feet, then it's back to Genesis and 'Rachel's Sister', a bittersweet account of Jacob's two wives, told from the perspective of the less favoured Leah (whose father deceived Jacob into marrying first), the theme of sibling rivalry returning in 'Mom Always Liked You Best', a ragtime retelling of the story of Esau and Jacob. Envy, lust, murder and desire are staple biblical ingredients, and so we get 'Your Neighbor's Garden' which, suitably sounding like something from a spaghetti western, recounts how Bathsheba was raped and impregnated by David, who also killed her husband. Naturally, mention of a David inevitably prompts 'Mighty Goliath' and, sung from his perspective and invested with a degree of sympathy, his death at the hands of the boy and his slingshot. And on the subject of strongmen, inevitably along comes 'Delilah's Lament', a revisionist, more complicated account of the woman who brought about Samson's downfall ("I only took the money 'cause it meant that I'd be free").

There's playfulness here too. 'Dear Momma' is in the form of a letter home by Solomon's latest wife finding being married to a king with an insatiable sexual appetite isn't all it's cracked up to be ("He doesn't sing like his father did/At least not when he's with me/But he's built a beautiful temple, Momma/And he writes decent poetry"), signing off because he's been turfed out of the bedroom to make way for the Queen of Sheba.

Elswhere, the cast list includes Tamar (the fingerpicked, part spoken 'Gate of Enayim'), who, widowed and childless, dupes her father-in-law Judah into impregnating her so the line can continue; the unnamed daughter of Jephthah (the 60s folk-sounding 'No Name'), who unfortunately wound up as a sacrifice thank to her dad's rash promise; Dinah ('Not Their Fault'), the daughter of Jacob, whose lover was killed by her brothers in the belief that she'd been raped; and back in playful mode and curiously reminding me of Melanie, 'Because It's Gonna Rain' which, obviously, is about Noah's wife Emzara, who can't believe the old man wants to build big boat.

It ends back in Genesis with 'The Truth That Remained', a circular fingerpicked guitar pattern framing the story of Sarah and her relief and praise for God when her husband Abraham returns home with Isaac, the son he had taken to be sacrificed.

A fascinating outcrop of the #MeToo that turns a spotlight on the trials and tribulations of oppressed, exploited and often misinterpreted women in the Bible whose stories have only ever been footnotes to the patriarchal framework, and good tunes into the bargain.