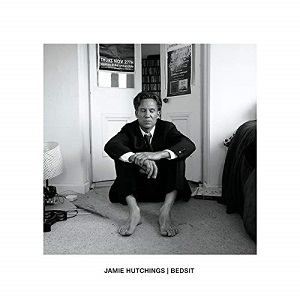 
Australian singer-songwriter has been around in various musical guises since the 1980's. Back then as frontman for underground indie band Bluebottle Kiss, more recently fronting the quartet Infinity Broke, collaborating with fellow singer-songwriter Peter Fenton under the name of The Tall Grass, and of course, solo. In this time he has recorded and toured extensively around Australia, North America and the UK.

Bedsit is Jamie's fourth solo album and was written and recorded in the Australian outback at a former shearing shed converted into a production room and art workshop. Here with the sparse lay out of six microphones, a 16 track tape machine and a few trusted musical allies Jamie forged the intimate, reflective songs that make up the record.

Opening song 'Second Winter' ambles in on a soft acoustic strum and bass line before Jamie's distinctive Australian drawl tells us in spoken tones the rather surreal tale of waking up and finding his feet had been replaced by blocks of ice. Improbably, or perhaps in a statement of Australian stoicism, he does not question this turn of events too much and adapts rather well to his predicament as he learns a new, sliding way of getting around! Then, at around three minutes in Jamie slips into his singing voice and tells us 'I've been diving, amongst the coals to find a spark' and the rest of the song is full of lovely imagery such as this. Running in at over seven minutes this song travels easily from the engagingly odd to the engagingly lovely and although the musical accompaniment is minimal, the track nonetheless pushes and builds throughout adding to the basic guitar and bass instrumentation.

'Judas Is A Girl' is similarly sparsely instrumented but more dreamy piece, followed by 'It's On Me', which is my favourite track on the album. It's another propulsive song with a back beat guitar strum and bumping bass line but slightly faster than the opening track. I particularly like Jamie's softly raspy voice on this one and the conversational way he runs the evocative lyrics together reminded me a lot of Paul Simon. "She said today I'm getting married, you said, is that a fact" and "The driver said where to sweetheart and she explained exactly where she had to get to" Words that on paper look like they would be impossible to fit into a song structure, until heard!

'Walking Dream' is a lot slower with the vocal sitting on top of fingerpicked guitar, 'December Park' is courtly with its almost Mariachi strum and 'A Hill' is the nearest Jamie gets to a straight forward ballad here as he pushes his voice out through the building song.

On to the last three tracks, 'Above The Rain' has a multi tracked, spacey vocal of the James Vincent McMorrow variety and opens out musically into perhaps the fullest sounding track here, the piano led 'Shadow On The Lung' is heartbreakingly personal and 'Here Comes The Frost' ends things up on a brighter, upbeat note with its infectious guitar and vocal.

Interesting album this, definitely quirky and idiosyncratic, but in an inclusive, not exclusive way. The recording feels very immediate and organic, perhaps low-fi, but not low level and many times reminded me in sound of Sweden's Tallest Man On Earth, which is a very good thing in my book.

Given the personal nature of this record I am not sure how representative of Jamie Hutchings as an overall performer this is, but as someone who had not heard of him before it certainly works for me.

All in all, Bedsit is a lovely little album full of understated treats that with repeated listens will gently worm their way in to your consciousness.