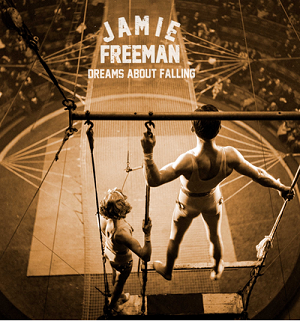 
The fact he is Hobbit star Martin's brother is the least interesting thing about Brighton's Jamie Freeman. A former ad hoc member of Frazier Chorus, which featured other brother Tim, and co-founder of Union Music Store in Lewes which has, in turn, given rise to the label run by Del Fay and Danny George Wilson, he's already released two critically acclaimed albums and an EP that have seen him hailed as one of the leading names in UK Americana.

For his fourth release, his reputation has secured the production services of Neilson Hubbard and, recorded in Nashville, co-writes with such luminaries as Ben Glover, Amy Speace, Brandy Zdan and Angaleena Presley alongside regular collaborator Amy Tudor.

The album title alluding to the fine line between success and failure, the exhilaration of being about to take a fateful step, some of the songs being about how childhood shapes our adult lives and how we deal with the memories

Featuring Hubbard on piano (which and, as throughout, Siobhan Kennedy on backing vocals, it opens with Michael Logen co-write 'All In The Name', ringing acoustic guitar and thumping drums driving a rousing slice of Americana pop about the trials and tribulations we put ourselves through for love. The piano coda segues into the opening of 'Down Range', Barry Walsh taking over the keys as Presley duets on a soaring drums-and cello pulsing tumbling ballad about Gulf War Syndrome as a veteran returns to his wife a traumatically changed man, hardened by his experiences.

Another tragedy, the Grenfell Tower disaster, provided the inspiration for the lyrically potent 'The Fire', a rhythm chugging, infectious chorus co-write with Glover featuring Will Kimbrough on guitar and, wreathed in imagery of smoke and betrayal, sung from the perspective of the flames, an unfeeling force ("I don't bear a grudge, I don't need a reason, I'm not here to judge") simply does what it does, turning the truth to smoke.

Co-penned by and featuring Brandy Zdan, the slow, moody, organ-backed and bluesy guitar 'Standing On A Star' has its origins in the aforementioned record store (the star painted on the floor) and the intimate wholly unamplified live performances it hosts, the song (which references, among others, Larkin Poe) tapping into the feelings performers feel in the moment before they take to the stage.

The tempo kicks back up with the driving drum beat of a new version of 'Rum and Smoke' from the Hasia Dreams EP, a number written in collaboration with Telisha and Doug Williams from The Wild Ponies that recalls a childhood of shame being raised by alcoholic parents as the teetotal Freeman sings "my Dad did all my drinking for me."

Adopting a Sympathy for the Devil Stonesy rock 'n' roll swagger, 'The Deer' (as in presumably transfixed in the headlights) deals with getting lost in a comfortable relationship, aware of something missing but unable to pinpoint what. Tracing a similar notion, Hubbard on piano, the simple, acoustic waltzing Amy Speace co-write 'The Man I Want To Be' he describes as being about "any man who's fallen short of what he knows he can be, and what his love wants him to be", promising more than he can deliver in a "relationship that's creaking at the seams and going unloved."

The musical mood shifts again for the slow chug and sway blues 'Darker Wave', an organ-fuelled heavy number that, again with one suspects autobiographical roots, talks of those who, arty and quiet as opposed to sporty and aggressive, "grew up unable to live up to the masculine stereotype expected of them", a memo that it's okay to be who you want to be not what others demand.

Although she doesn't sing on it, Presley co-wrote 'I Miss Those Bars', a powerful thoughtful, lap steel coloured slow waltz about that draws on past second hand experiences of addictions and of having to fend for yourself when you escape from their prisons and the institutionalisation fear of being drawn back in to what you know.

The album ends with the solo-penned, piercingly poignant slow building 'Match Among The Ashes', again returning to the theme of memories of a painful childhood but one leavened by his mother's love and the belief that whatever he did was and would be something special, that, "You'd believe that you can fly, because she told you, so you try." The album amply confirms her faith.