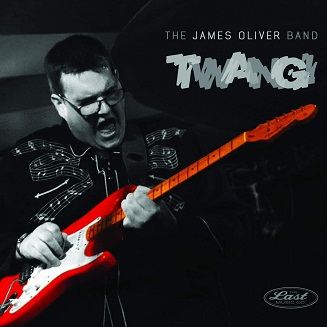 
No sooner had 'Twang' arrived for review then as if by magic James Oliver was named 'Emerging Artist Of The Year' in the 2020 UK Blues Awards. Fortuitous timing indeed, which will no doubt help shift a good few copies of his debut album.

Although only still in his mid twenties, James Oliver released three albums with the South Wales three piece rock band 'Glas' before embarking on a career with himself at the helm on lead guitar and vocals. Lauded as a fiery, rock-blues guitarist he has made waves in numerous live shows over recent years, so what better time to build on this momentum with his debut release.

Opener 'American Cars' barges in full throttle with drums, bass and riff heavy guitar from James with more than a nod to Chuck Berry in a 'tongue in cheek' homage to the lack of Cadillacs and Lincoln's on the streets of South Wales. He has a solid, but not particularly distinctive voice, that nonetheless serves these songs well and ensures the guitar takes centre stage at all times.

'She Was The One' is a catchily staccato, Dr Feelgood sounding affair and then two Big Joe Turner tracks follow with 'TV Mama' given a boisterous electric slide treatment before the joyous romps of 'Honey Hush'.

And so it goes through the rest of the album. Very tight, mainstream Blues- Rock that's impossible not to like. Favourites are going to be dependent on how you like your Blues-Rock to be weighted and my preference is a bit more rock than blues, so standouts for me were the extended, slightly dissonant workout of 'Outside Help' and the Dick Dale musings of the splendid instrumental 'Misirlou', which sounds like it was lifted from the sound track of some Quentin Tarantino epic.

So, all in all a solid first outing for The James Oliver Band. The sound on 'Twang' follows well worn pathways which is going to be of great appeal to lovers of finely played Blues-Rock, but personally I would have liked a little more originality and adventure, particularly from a young player like James coming up through the ranks. This is a minor quibble though, and in any event, the live arena is where these songs will really shine.