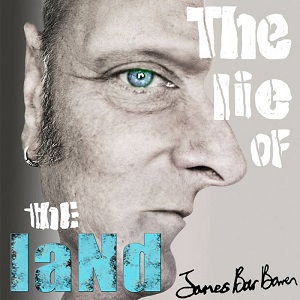 
The art of protest song seems to be having a revival in recent times in the mainstream but make no mistake, it has been bubbling away for many years...

Hailing from Huddersfield, Yorkshire is James Bar Bowen. A stalwart of the DIY Folk/Punk circles across Europe and his latest offering is a ten track slice of Folk/Punk with everything in between from Italian Anti-Fascist traditional folk song, Country, straight-up in-yer-face acoustic punk and even a shanty. This may sound like an eyebrow raising eclectic smorgasbord of genres but it manages to remain focused and cohesive throughout the album.

'The Butcher's Apron' and ' A Pyrrhic Victory' open the album up tackling issues as nationalism and class. From the first few tracks you are away of lots of wordplay and poetry, ''A scattergun approach is quite unsatisfactory, while time and the tide run on a glory-bound trajectory, the low-lying fields will be flooded full eventually'' which is helpfully aided with a lyric booklet.

'Break My Fall' becomes one of the standout pieces of the album. Heavily Accordion and staccato Horn driven with Bowen's poetic lyrics and vehement delivery, makes for a potent cocktail of protest song.

You could be forgiven to be mistaken, but this is no solo singer-songwriter album, rather a cohesive collection of protest songs with a plethora of musicians on Accordion, Bass, Drums, Bouzouki, Banjo, Horns, intermingling and weaving through these tracks. For the first time listener, every track is a surprise. As aforementioned, the album takes you on a genre-bending journey which keeps the listener reaching for the repeat button numerous times.

Final track 'Bella Ciao' treats us to an Italian Anti-Fascist song, some may recall Chumbawamba recording and releasing a fine version. This is the perfect final fanfare of album which leaves us on an inspiration high note.

Throughout this album, Bowen refuses to be pigeon holed into a genre or a style, rather making a conscious choice to furrow his own path, keep an open mind and to blend styles together into a style which becomes his own. If you're looking for authenticity from a protest singer with venom, bite and a smattering of humour, you might be hard pressed to find another release like this one this year.