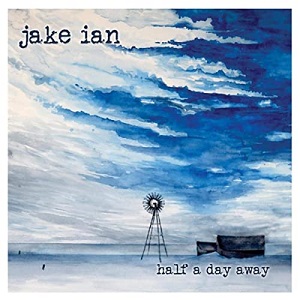 
Canadian born and Edmonton based singer songwriter Jake Ian has produced an album here that will appeal to lovers of Folk, Country and Americana style music.

He is one of a plethora of Canadian artistes that I have reviewed over the last twelve months, as the Country that produced Joni Mitchell continues to provide the music lover with quality sounds and albums.

Jake leads a double life both as a solo performer and appearing also with his band, usually at fairly small venues, where he has built up a solid following. Writing all the songs on this album, he has a voice that has been compared to Springsteen with his slightly gruff vocals yet surprisingly gentle delivery.

The nine songs on this album all have one thing in common, they have been beautifully produced never allowing the backing to overpower the emotion and subtlety of Jake's lyrics. The foundation of the backing music is guitar but the fiddle, piano, mandolin and even an accordion play leading parts too. The song that perhaps best demonstrates Jake's approach to a song is the last track on the album. "All Of The Good Times Are Passed And Gone" a look back on life with a beautiful piano backing and subtle harmonies throughout. Jake's voice is most suited to this type and tempo of song in my opinion.

"All My Trials" with its banjo in the background is the sound that you would expect to hear coming from a bar in Nashville. "Dear Eleanor" is a very slow number delivered as a farewell letter to a lover and where the harmonica adds to the pathos of the lyrics. "94 Romance" has the sound of a Parisian bar and is somewhat upbeat when compared with the very laid back sound and tempo of the other tracks on offer here. Jake definitely knows how to write a song that will show his voice and talent off to its undoubted best.

Nine tracks makes this a fairly short album at just over 32 minutes and I did feel slightly short changed as I was really getting into the music when it ended. I like all of the tracks but my undoubted favourite is the slightly more upbeat "Share You With The Road."

Overall, this is a very listenable album from an artiste that deserves greater recognition for both his singing and his undoubted skill as a song writer. Jake has a voice that produces a delightfully mellow and relaxed sound and one that it is easy to imagine listening to in a smoky café or bar late at night. You would no doubt go home very relaxed!

Half A Day Away